Carmel High School senior Nimish Bhat came across an article on researchers from Brazil who had conducted tests with fish skin for healing wounds and burns. 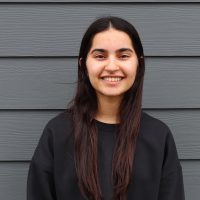 She brought it up as an idea for a DECA competition and the idea progressed from there.

Bhat’s pitch for her company, Omega Skin, won the Innovate WithIN Lower Northwest Indiana Region 5 finals, which were held virtually April 19, presented by the Purdue University Burton D. Morgan Center of Entrepreneurship. She earned $1,000 for the winning pitch and earned a spot in the state competition to be held at 2 p.m. June 19 at the JW Marriott in Indianapolis.

The nine region winners and one wild card entrant will compete to win $10,000 to continue building their business, $10,000 for future education in a 529 plan and $5,000 toward their entrepreneurial, immersion trip experience.

“(Omega Skin) is a bandage that is meant to be low cost for developing nations for burn treatment and other kinds of wounds,” Bhat said. “It utilized tilapia fish skin cells. The main aspect is it is supposed to be more effective and cost efficient than anything else on the market for these developing nations.”

Bhat has been working on the project for nearly two years.

“I’ve created what it could look like,” Bhat said. “Because of financial restrictions and school, I am not able to purchase a chemical purification machine or the machines that are needed to make that matrix.”

Bhat took the fish skin, put it in saline water and then applied it to look like a matrix on a bandage.

She was scheduled to begin a five-week boot camp for the finalists May 10, which is intended to help participants refine or pivot their ideas to give them the greatest potential for success at the state competition.

“Mostly, it’s about fine-tuning it and making it as feasible as possible,” Bhat said.

Bhat plans to major in corporate innovation and international business and minor in French at Indiana University.

“I’m considering going on the pre-med track as well,” she said.