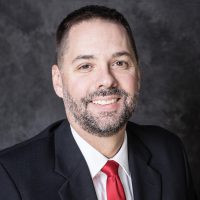 McCaffrey was nominated for the honor by approximately 40 other area high school principals. The decision was made based on accomplishments, qualifications and leadership.

McCaffrey has been principal at NHS since 2019. Prior to that, he was an NHS assistant principal for seven years, after having been in leadership roles with Westfield Washington Schools and Franklin Community Schools. McCaffrey started his career at NHS as a student teacher and later became a science teacher.

“Working at NHS is a special experience and I’m honored to be recognized by IASP and my peers,” McCaffrey stated. “Leading a school is a big commitment and a collaborative effort. This award would not have happened without the backing of my family and the strong dedication of NHS faculty and staff. Thank you to my wife Tracy, our daughters Olivia and Alexa, and the NHS team for all you do to support me, our students and the community.”

“Craig is a humble leader who is well respected by his staff, colleagues and peers,”

Music Education Association and also has been instrumental in growing

McCaffrey holds a doctorate in education from Ball State University, has served as an

adjunct university education professor and is a graduate of the Noblesville Police Dept.’s Citizens Academy.

The Indiana Principal of the Year will be named in November.