The largest congregation of Muslims in the state has opened its new $8.8 million mosque.

According to Hosam Wanas, the general contractor for the project, the mosque “complements the city’s futuristic vision,” and is designed to be one of – if not the most — beautiful mosques in the nation. 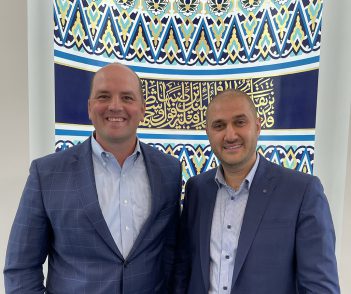 The new mosque is an expansion for the Al Huda Foundation. It had previously been gathering for worship inside the school on the same property. Now, the school will be the only use for the older building.

Among the mosque’s prominent features are three domes made of gold-plated fiberglass. The main dome has a radius of 30 feet while the two smaller domes have a radius of 18 feet. It took four months to construct the domes and took a team of technicians 25 days to install them. Twin minarets tower 60 feet, flanking the entrance.

Inside the musalla, or main prayer hall, hangs — under the main dome — a massive chandelier, 14 feet wide and weighing 1,200 pounds. The chandelier, like the other chandeliers inside the mosque, was custom built by Egyptian master craftsmen. It is made of copper and plated with 18 carat gold.

The musalla is the largest room on the property at 13,000 square feet, with 28-foot-high ceilings. It can hold approximately 400 people. The floors are blue with intricate weavings of gold and white. White represents purification in Islam, and blue and gold were selected by the contractors. The carpet is from Turkey.

There are two floors inside the musalla, one on the carpeted area at ground level and on a balcony above. The separation is intentional, as during the main prayers men and women are separated, with women in the balcony and the men on the ground level. A glass-enclosed elevated platform is built into the back wall, where the imam, Dr. Nasser Karimian, will offer teaching and lectures.

“It will allow me to address the entire congregation,” said Karimian, noting that the platform will make him eye-level with the women in the loft.

The musalla’s back, eastern wall is largely white, with gold stars and wooden geometric designs. A golden Quranic verse caps the wall outlined by a long blue stripe. The verse was crafted by hand out of wood. An 18-foot-tall niche –– called a mihrab — punctures the back wall to direct the congregation toward Mecca.

Inside the mihrab, on the inside of the main dome and throughout the mosque, are intricate designs and Quranic verses, each designed, drawn and painted by Indianapolis-based artist Jessica Hancock.

“It is my Sistine Chapel,” Hancock said.

Hancock spent four months drawing and painting the spaces. There are frosted designs on 28 of the windows that are her work, too.

“I remember what it was when I first saw it, when there were no windows and no doors. It’s fun to see what it is today,” Hancock said. “But, personally, to have the opportunity is a privilege and a blessing. I will probably be forgotten at some point, but the work won’t be and the inspiration that it provides won’t be, and that’s everything. That’s wonderful.”

For Wanas, the contractor who oversaw the building’s construction, the most special moment came when the community got to see the mosque for the first time on June 1. It was a festival atmosphere with balloons, food, bounce houses and an outdoor market.

“It is a great feeling. When I looked to the community and I saw the happiness in their eyes and everybody smiling and I felt that the mosque is finally completed, I felt grateful,” Wanas said. “The mission is completed.” 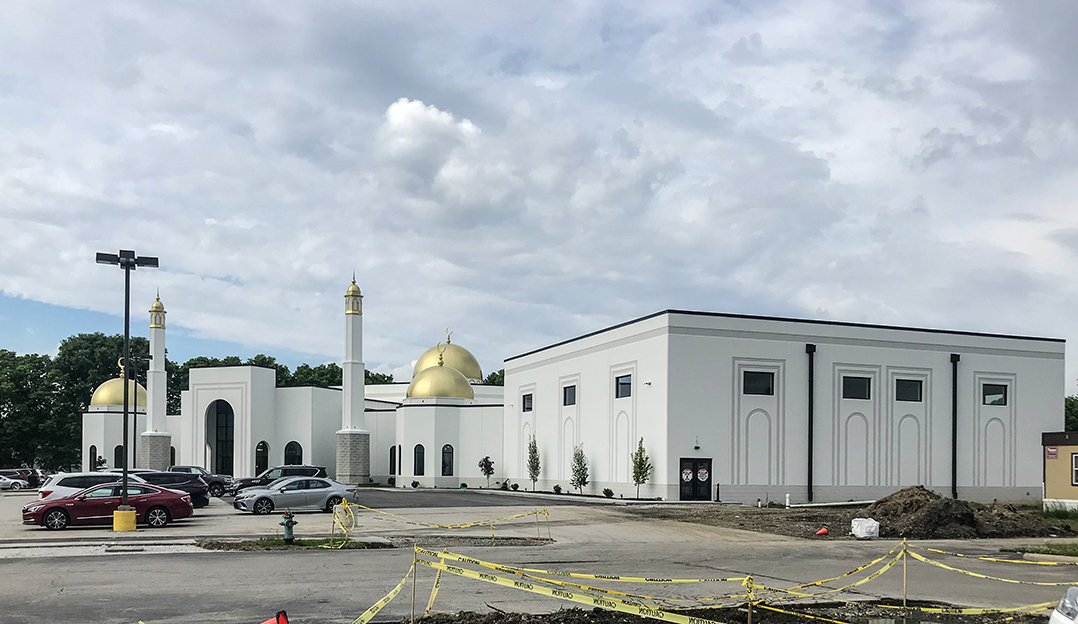 The view outside the new mosque.

The June 4 ceremony was a whirlwind for Imam Nasser Karimian, who has only lived in Fishers and been the imam for a year.

With photos being taken every few minutes, and many new connections to make, Karimian was seeing many of the people gathered for the first time. The Montreal-born Karimian had been leading a congregation in Las Vegas for two years before being recruited to Fishers in 2020. He said the addition of a kindergarten-to-12th-grade Islamic school on the site helped draw him to Fishers.

“All my kids can now go there. I wanted them to be raised with Islamic values and the Arabic language, understanding the Quran and in its original language. I thank God for that,” Karimian said.