“It’s really our passion and our mission to tangibly and positively impact the classroom and bottom line of a school,” Hipskind said. “We looked at about five different business opportunities and found a local installer who educated us about solar and the need for schools for creative (budget) mechanisms.”

Hipskind had previously founded a business that helped with teacher evaluation software for 60 school districts. He sold the business to Herff Jones. Hipskind’s father, Keith Hipskind, is dean of students at Greensburg High School, and his mother is a retired teacher.

Poer’s background is in web technology and consulting. He was the co-founder of Synovia, a school bus tracking software. It includes an app called Here Comes the Bus.

“Kelly and I have been friends for years,” Poer said. “I was exiting a business, and he was looking for what’s next. We both said we wanted to get in education and make a tangible impact and a difference. We put our heads together in late 2017 and (started) the company in 2018.”

“As we looked at the benefits there, especially for schools, we said this is a problem that needs to be solved,” Poer said. “The cost savings are real. Kids are petitioning their school boards to go solar or find other ways to be renewable and climate friendly. There are some amazing tax credit financing and third-party financing mechanisms out there that could make this really easy for schools. We brought all those pieces together in the first model of its kind in the country where there is no capital or debt expense to the school. We handle all of the due diligence, engineering, financing and regulatory.

“We bring the capital to build the project, and then once it’s operational, the schools start paying us a flat fixed monthly service fee that, combined with any remaining electric expenses, is usually significantly less than what they had been paying previously.”

Hipskind said Sun FundED’s full-stack service model, referred to as Solar-as-a-Service, was designed specifically for education to take the political, financial and technical risk and burden out of the equation.

“Bringing in capital and construction partners under their umbrella of services creates the best value for schools and opens up cash advance options and academic programming as well,” Hipskind said.

Hipskind said Sun FundEd is the first company in Indiana to finance solar for schools. Previously, Hipskind said most solar deals for schools were funded by a referendum.

“We are the only company in Indiana and Michigan who will have invested over $3 million to have to learn and adopt third-party finance requirements, understand all regulatory matters, know how to technically develop projects, oversee construction and remain with the school for the life of the term,” Hipskind said. “Typically, there is a 10-to-20-year payback period for a school. With us, there is no payback period. Schools in Indiana and Michigan are seeing on average about a 15 to 30 percent saving in Year 1. Next to payroll, power is the second-highest line item.

“So, when you have schools that are crunched for money and enrollment challenges along with COVID (issues), it’s nice to have someone that can come in and take a complex one- to three-year process and condense it to a few meetings and finance millions of dollars at a school where the taxpayers don’t have to pay. It can benefit (the schools) short and long term.”

Hipskind said 40 schools are under a letter of intent agreement, with the majority in Indiana and Michigan, to evaluate Solar-as-a-Service.

“We’re looking at a national expansion in the next several months,” he said.

“We anticipate savings of over 30 percent Year 1, and the school paid $1 to get going,” Hipskind said. “Construction is complete and went smoothly. All went well with NIPSCO, the school is happy, and we couldn’t be more thrilled to deliver on our mission built on renewing education.”

Construction began in April at Otsego Public Schools in Michigan, followed by Ovid-Elsie and Peace Lutheran.

“Taylor University construction should begin this summer and is planned to be the largest education-based solar farm for any school in the state of Indiana,” Hipskind said. “For our first handful of schools who executed a service agreement with Sun FundED, along with our partners, we are investing over $10 million into education to the direct benefit of educators, students, taxpayers and the environment as well as providing many jobs in the states we serve.” 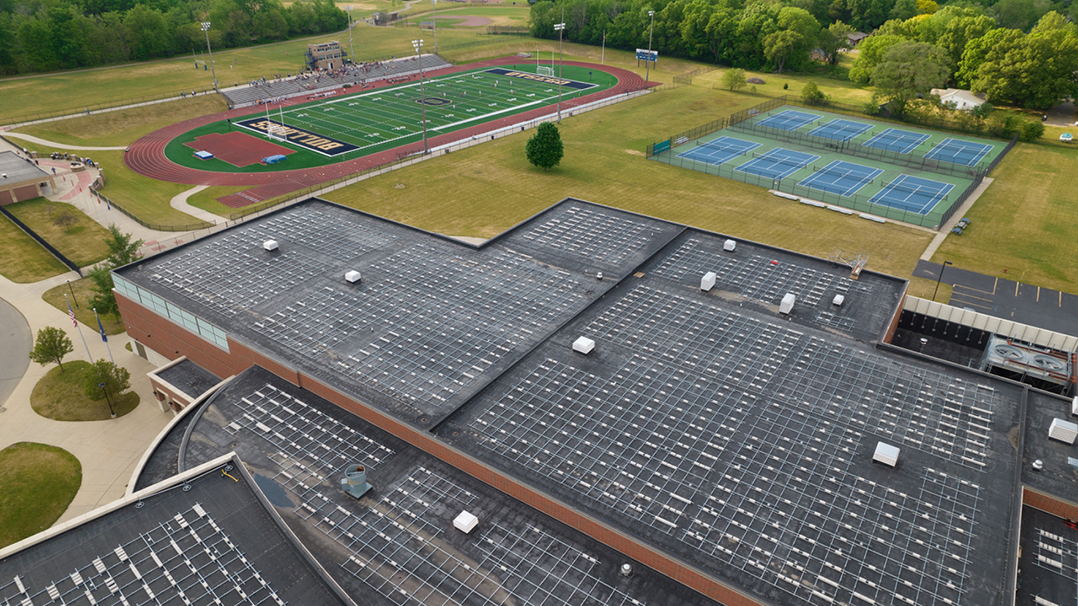 Racks for solar panels on the roof of Otsego High School. SunFundED partnered with the Michigan school for one of its first installation projects. (Submitted photo)

“SAMI, the only platform of its kind in the U.S., is fast growing in interest and popularity because it meets students and teachers where they are,” SunFundED co-founder Kelly Hipskind said. “SAMI focuses on everything renewable and sustainable for schools and is a nice enhancement to STEM-related learning, the trades and so much more. Scholarships, lesson plans and many other amazing features are offered with SAMI, along with a research array and interactive lobby experience.”

Hipskind said there is a lobby kiosk that showcases green initiatives for parents.

“You get a little tickle on what solar energy and other sustainable measures are all about,” Hipskind said.