This is a blast from the past for Anne Beck.

Beck was cast in the original company of “Saturday Night Fever,” a production close to her heart.

“I started as a swing and then played Stephanie Mangano on Broadway, and then on (the) first national tour,” she said. 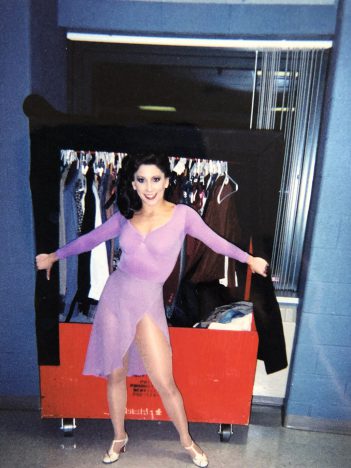 Her husband, Scott, also was part of the original company.

“We started dating toward the end of the tour after 3 1/2 years with ’Fever,’” Beck said. “We were on Broadway with it for two years, and the national tour for 18 months.”

The Fishers resident is now directing and doing the choreography for Civic Theatre’s Youth Artists Program’s production of “Saturday Night Fever” July 29 to Aug. 1 at The Tarkington at the Center for the Performing Arts in Carmel.

“It’s definitely cool to be part of an original show and now to share it with this amazing cast of high school artists,” said Beck, who is Civic’s YAP coordinator. “They are learning original choreography (of Arlene Philips) and learning 1970s styles, history, icons, etc.”

Beck and her husband are performing as Tony Manero’s parents, Flo and Frank Manero. Daimon Anderson is playing the character John Travolta played in the movie.

“It’s a completely new style and skill set for me — the dancing, the accent, the singing,” said Anderson, who will be a senior at Mt. Vernon High School this fall. “All of

it is new to me, and I love it. Tony is such a contrasting character. He is confident and strong. But most of all, he is hurt. I think that kind of character is amazing to play.”

Anderson said “Boogie Shoes” is definitely his favorite song and dance in the show.

“It just has so much energy,” he said. “It is so much fun to do. Anne hasn’t talked a ton about her experiences. We’ve been busy practicing our tails off. The choreography is fantastic and so much fun. Anne is an incredible director and choreographer. Working with her as our director is an amazing experience. Now, the cast they can say they did a show with a Broadway cast member as well.”

Emily Chrzanowski, a 2021 Carmel High School graduate, is playing the role of Annette.

“I like the role (of) Annette because I get to experiment with being a character who is very vulnerable,” Chrzanowski said. “She is an insecure girl who truly has a kind heart but is conflicted with her love for Tony and his lack of love for her.”

“It is a huge dance number that feels like a party the whole time,” Chrzanowski said. “My other favorite song to perform is my solo, ‘If I Can’t Have You,’ because I love pouring my heart into this beautiful ballad. I have not seen any other productions of the musical, but I have seen the movie.

“Although the soundtrack of the movie is amazing, the script is absolutely awful. It is outdated and is very offensive and inappropriate, which makes me like the stage version that much more.”

Chrzanowski said having an original Broadway company member direct and choreograph the show has been a privilege.

“It is such an amazing feeling knowing that I am doing the same choreography as the original Broadway cast did,” she said.