The Carmel High School swim team and the Carmel Swim Club have been dominating the competition in the pool for decades, but until this year it had never had an athlete make an Olympic team.

Now it has two.

Drew Kibler, 21, made the team by finishing third in the 200-meter freestyle at the U.S. Olympic Swimming Trials last month in Omaha to qualify for the four-person 800-meter relay team. The 2018 CHS graduate swims at the University of Texas.

Jake Mitchell, 19, made the team in the 400-meter freestyle. Mitchell graduated from CHS in 2020 and swims for the University of Michigan.

Both Olympians took some time out of their training in Tokyo to answer questions for Current in Carmel about reaching a longtime dream. 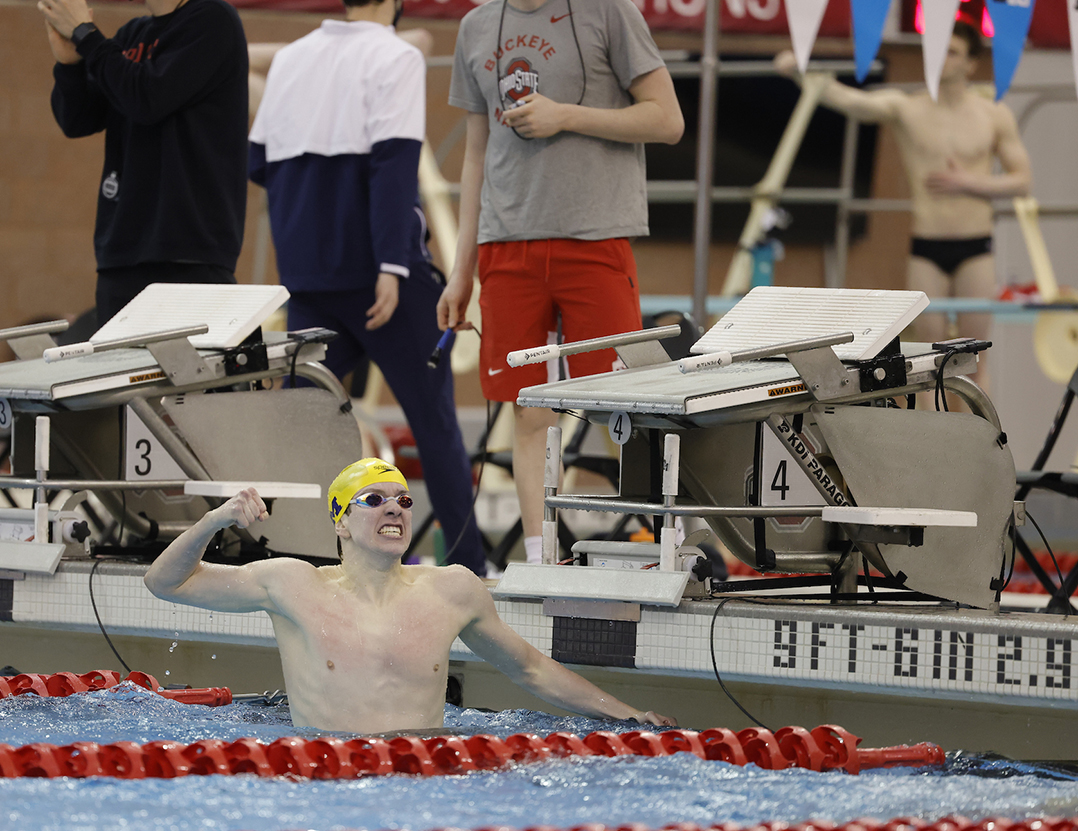 Jake Mitchell, a 2020 Carmel High School graduate, swims for the University of Michigan. He will compete in the 400-meter freestyle in the Tokyo Olympics. (Photo courtesy Michigan Photography)

When did you first dream of being in the Olympics?

Mitchell: My first dream of being in the Olympics was back in 2008. I remember watching Michael Phelps win eight golds and just the sheer awesomeness of the Olympic Games and pride for one’s country and the domination in the sport that was never before seen was extremely inspiring and made me want to compete at the world’s biggest stage someday.

Kibler: I first dreamt of being in the Olympics from the moment I started swimming competitively when I was 7, and a year later I watched Michael Phelps get eight golds in Beijing and my goal became even more real.

When did you first realize swimming in the Olympics was a realistic goal for you?

Mitchell: I first realized that this goal could be a reality after Summer Nationals in 2019 when I was the No. 2 ranked American in the 400-meter freestyle. It finally began to settle in that this dream was a possible reality.

Kibler: I honestly always believed in myself because of the amazing friends, family and coaches around me that always supported me from the beginning. It became even more real when I went to the 2016 Olympic Trials, and I got a better idea of what it would take to make this team.

How has the Carmel Swim Club played into your success?

Mitchell: Carmel Swim Club has played a tremendous role in my success. The coaching staff is there to help every swimmer achieve their goals in life, whether swimming or unrelated to the sport. Not only did the club help me to train well and get faster, but it also helped me to grow mentally so that I was able to perform under high-stress situations.

Kibler: I had a number of special coaches that helped me over the years, but CSC is a program that demands excellence in every way from top to bottom. The coaches and teammates helped me turn dreams and loose goals into concrete plans. In my first year and a half at Carmel, I experienced extremely rapid improvement in all my events, but especially my 200 freestyle, which is the event I am swimming at the Olympics.

How does it feel to be among the first Carmel High School/Carmel Swim Club athletes to make an Olympic team?

Mitchell: It is such an honor. Carmel has had such a tradition of excellence for so many decades with so many amazing athletes. It is truly an honor to have followed in their footsteps and also to be able to start a new tradition of Olympic athletes coming out of Carmel.

Kibler: It is a tremendous honor to represent CHS/CSC and just the City of Carmel this way. I have wanted it for so long and it feels really good to feel all of the support from such an amazing community that supports swimming so much.

Has the Carmel Swim Club or your hometown of Carmel played a role in your preparation for the Olympics? (Have you done training here recently, for example?)

Mitchell: I trained at Carmel Swim Club from 2013-2020 and in 2021 for the two months leading up to the Olympic Trials. The community at Carmel has been so supportive and I am extremely grateful for all of the support. The combination of being with family and being able to train under my old coach was such a fun opportunity.

Kibler: Carmel (both my hometown and my club) played a huge role in preparing me for the Olympics by helping me so much during the pandemic and summer of 2020. It allowed me to mentally reset and prepare away from the pool while also staying focused and driven in training.

What is it like having Drew Kibler on the Olympic team with you?

Mitchell: It is really fun. I have been sort of keeping in touch with him over the past few years since we were teammates in high school, but being able to make the Olympic Team with him and get to travel the world with such a close friend is an amazing time.

Kibler: It is so exciting to have Jake on the team with me because I know how much we helped each other to get here. We worked so hard together when we swam at CHS, and even now at different collegiate programs we still motivate each other by always keeping up to date and encouraging each other through training from afar. It is pretty special how we have been a part of each other’s swimming journey.

What are you most looking forward to about competing in the Olympics?

Mitchell: I am really looking forward to racing with the stars and stripes on my cap for the greatest country in the world and getting to meet so many other athletes from around the world.

Kibler: I am most looking forward to learning from all the incredibly talented and hardworking athletes and representing my country on the biggest stage in sport, which of course is realizing the largest goal I have ever had.

When will Carmel’s swimmers compete?

Olympic swimmer Jake Mitchell will swim in one of the first competitions of the Olympic games in Tokyo, with the men’s 400-meter freestyle preliminary rounds set for July 24 and the medal round on July 25.

Drew Kibler will swim a couple days later, with the 800-meter freestyle relay preliminary rounds are July 27, with the medal round on July 28.