You are at:Home»Current in Carmel»Carmel Cover Stories»A lasting impact: How Clay Township parlayed a $55M Central Park bond to fund other projects for nearly 20 years

Take a drive around Carmel, and it won’t take long to find one.

Throughout town, large, white signs announce work at various construction sites as being funded through the Clay Township Impact Program. Ongoing projects include everything from park renovations to a youth sports fieldhouse to expanding the Japanese gardens behind Carmel City Hall.

Townships are primarily charged with providing assistance to the poor, fire protection and cemetery maintenance, and most in Indiana don’t go much beyond those duties. However, Clay Township, whose boundaries essentially match the City of Carmel, spent 2.6 times more on debt service alone in 2020 than any other Hamilton County township spent total for the year.

Any township could go into debt to fund major projects, but it’s not always an easy road. The Westfield Washington Township board approved a $15 million bond to grow its parks in 2018, but those bonds were later rescinded after an organized remonstrance against them. As a result, the township still has no debt.

The City of Carmel, which essentially shares the same boundaries with Clay Township, also has been known for racking up more debt than its neighbors, and the transformational results have made an impact on Clay Township Trustee Doug Callahan. He said he doesn’t always agree with Carmel Mayor Jim Brainard but that he’s been influenced by the mayor’s vision for building the city.

“He is so right that if we don’t do something with this community to bring people here, we’re just going to be another ordinary community with nothing to see,” Callahan said. “He really started the ball rolling, and I never forgot that.” 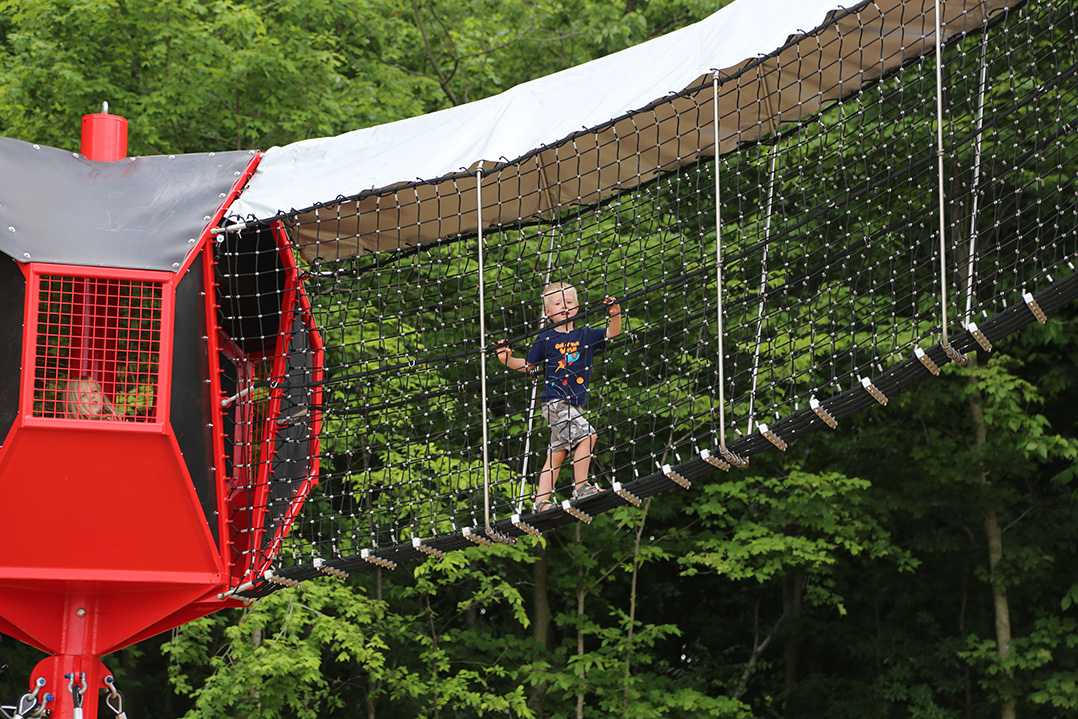 Callahan has been the local trustee since 2007, but the township’s strategy to use debt for major projects began before his tenure.

It wasn’t the first time Clay Township acquired debt, but in 2004 the township issued a $55 million bond to develop Central Park that went well beyond funding the massive project itself. Township leaders issued the bonds just in time for them to be factored into the formula for distributing income taxes, meaning the township’s share of income tax distributions would be higher during the life of the loan.

Soon after, the state legislature removed debt as a factor in the income tax distribution formula — in part to remove the incentive for municipalities to acquire more debt. It was a move township officials knew was coming, and the Central Park bond was the final one to be included in the old formula.

Around that time, the township entered into an interlocal agreement that stated it would give all local income tax it received as a direct result of the Central Park bond to Carmel Clay Parks & Recreation to use for improvements in that park and elsewhere. Initially, it led to CCPR receiving approximately $2 million annually, but that amount has grown to more than $3.2 million per year because of income growth in the county.

As a result, CCPR expects to receive more than $50 million in local income tax distributions during the life of the bond — nearly the amount of the bond itself. It’s been used to fund Westermeier Commons at Central Park, the Flowrider and cabanas at The Waterpark, updated playgrounds at Inlow Park, upgrades in Founders Park and much more.

Judy Hagan, who served as Clay Township trustee from 1999 to 2006, said it’s been rewarding to watch the plan to fund improvements play out as planned — and even better — through the years.

“It’s been a very positive process and a great success for the community,” Hagan said. “It was done in a fiscally responsible manner.” 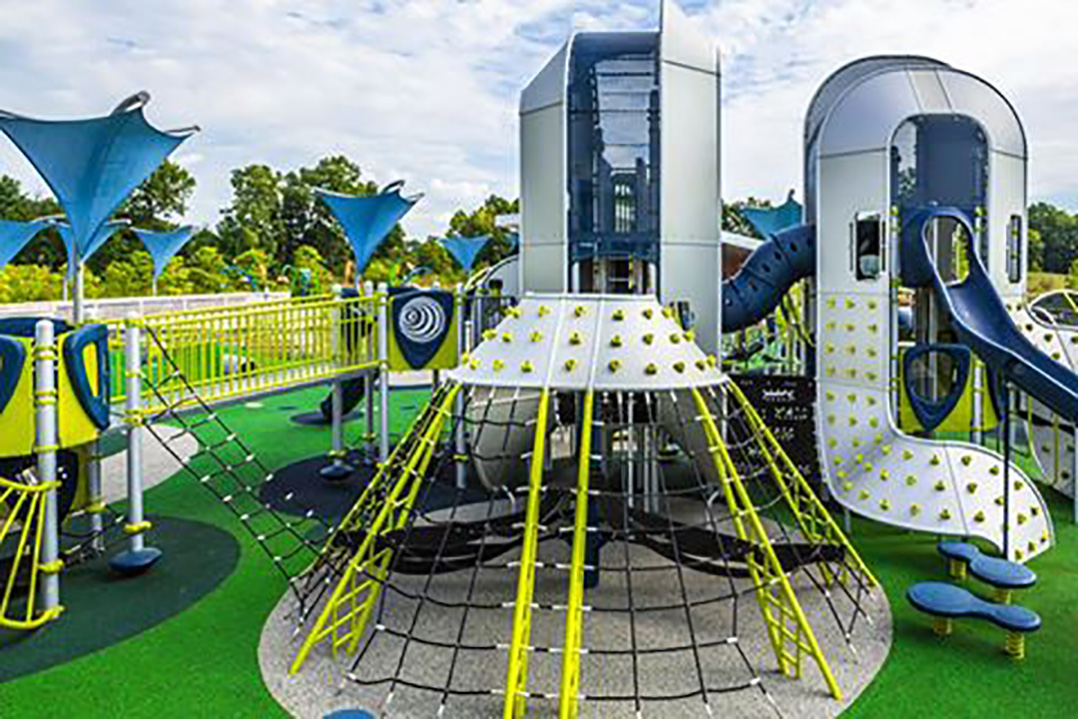 Local income tax distributions secured as a result of the 2004 $55 million Central Park bond funded the playground at Westermeier Commons.

Although the Central Park bond has led to improvements throughout Carmel, it’s also meant that other Hamilton County townships have been receiving less income tax funds than they otherwise would.

Debbie Driskell, Delaware Township trustee and executive director of the Indiana Township Association, recognizes that the formula is a good deal for Carmel, but she said it comes at the expense of the other townships.

“Most of the other trustees in Hamilton County look at the way the formula was done and sit in wonderment, because some of us could really use the money, and not necessarily for building big structures,” Driskell said. “There’s disparity in the way it’s set up. It should not be that way, because it allows one unit to receive the lion’s share.”

The funding formula doesn’t hamper Delaware Township from meeting its mandated responsibilities, Driskell said, but taking Carmel’s debt out of the distribution formula would help address more needs in Fishers.

“It’s not like we’re hurting for money, it’s just that when you see the disparity, it’s glaring,” she said. “I’m not blaming anybody other than the formula. It’s not right.”

Westfield Washington Township Trustee Danielle Carey Tolan said she is “kind of envious” of Clay Township’s LIT distribution and praised its 2004 leadership team for being progressive in its funding strategy.

“Kudos to them for seeing that,” she said. “That was before my time becoming a township trustee, but I think if I was in that position, I would’ve gone after it, too.” 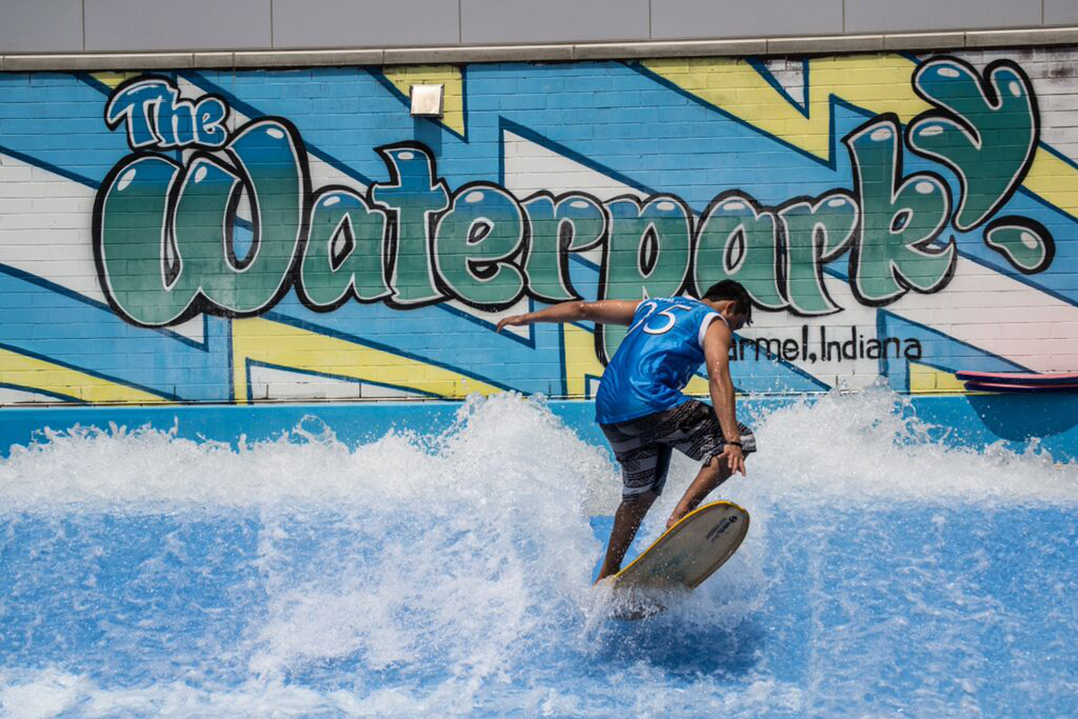 Local income tax distributions secured as a result of the 2004 $55 million Central Park bond funded the Flowrider at The Waterpark.

A problem for parks

After the Central Park bond is paid off in 2025, Clay Township’s share of LIT distributions will begin to decrease, which is good news for other townships and municipalities in Hamilton County but a major problem for the parks system.

Making matters worse for CCPR, another major source of funding, the park impact fee, also is likely to decrease significantly in the coming years. The fee, which may only be used for park expansions and improvements directly related to increasing capacity to serve a growing population, is collected for each dwelling unit built in Carmel. With little room left in the city for new development, revenue generated by the fee is expected to steadily decrease over time.

CCPR Executive Director Michael Klitzing said he has been in discussions with city and township officials to review funding options for the future. Possibilities include leasing instead of purchasing certain equipment and vehicles, pursuing grants more aggressively, issuing additional bonds and asking the Carmel Clay Parks Foundation to boost its role in supporting the parks system.

“We are currently reviewing options available to municipal park systems under Indiana law and anticipate making recommendations to the township board and city council later this year,” Klitzing said. “Both the township board and city council have expressed a strong commitment to the park system and its long-term funding needs, so I am very optimistic that collectively we will identify a viable solution to CCPR’s capital funding needs.”

Another benefit of the Central Park bond has been the ability of the township to add new debt as the bond is paid off without significantly changing the tax rate. This positioned the township well to implement the Clay Township Impact Program, which included nearly $60 million when announced in 2019 to fund 19 projects throughout Carmel.

Since then, the program has grown to include a museum for the Carmel Clay Historical Society and a pedestrian bridge over the White River. This and other debt leaves Clay Township on the hook for nearly $6.9 million in debt service due this year.

Callahan, Clay Townhip’s trustee, said he expects the impact program could be one of the township’s final major contributions to the community. When the bonds for the program are paid off, he doesn’t see much of a reason for the township to continue to exist.

Callahan, who plans to retire when his term ends in 2022, said now that the township and city have nearly identical boundaries, it doesn’t make much sense for the area to be under two forms of government when one can get the job done.

“I think down the road people will eventually see what I’m seeing, which is for Carmel to take over Clay Township,” he said. “We could do that pretty easy here.”