You are at:Home»Current in Carmel»Carmel Community»Girl Scouts upgrade garden, paint murals on way to Gold Awards 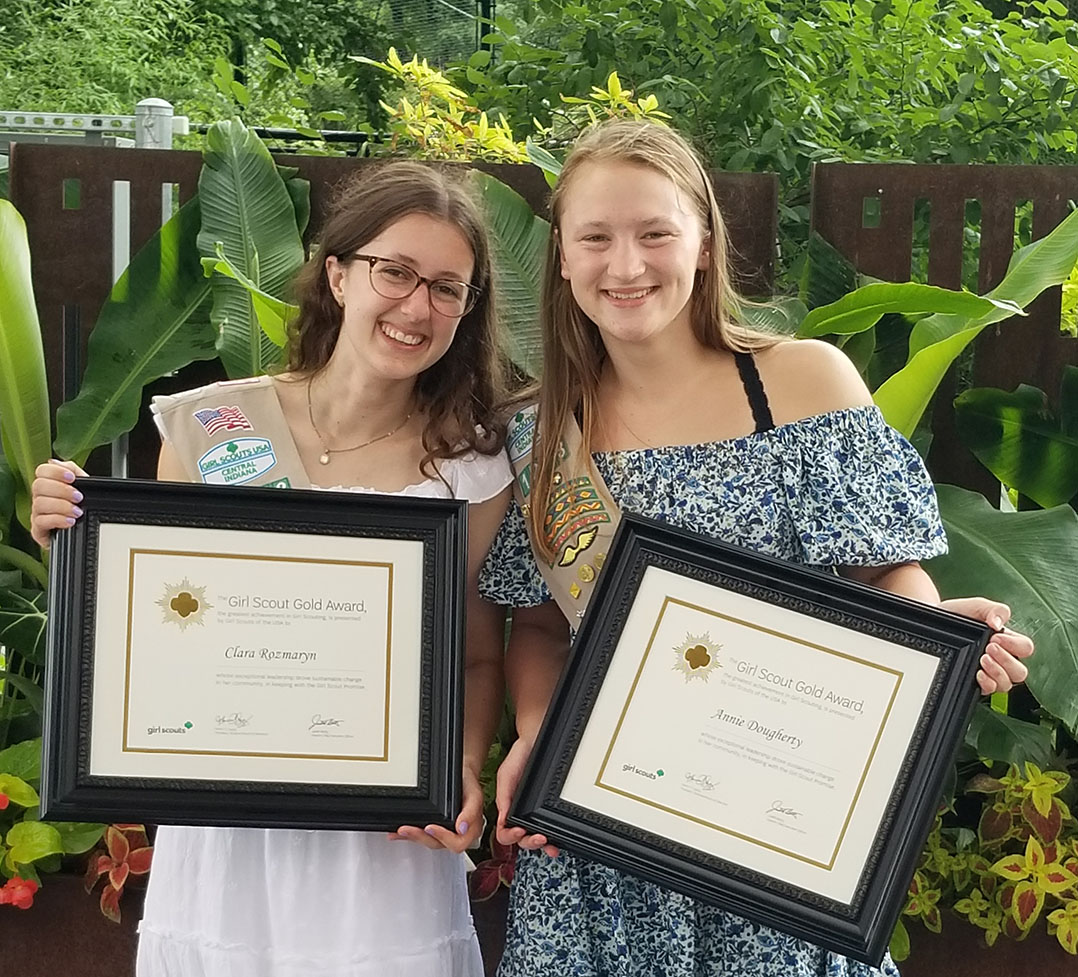 The award is bestowed on Scouts who complete 100 hours of individual work.

“That’s what (the award) means to me — it’s my own commitment,” Dougherty said.

“We all made the decision to do it ourselves, so it’s a big sense of personal accomplishment,” Rozmaryn said.

The Carmel High School seniors, who have been in Troop 1243 together since first grade, were honored at the Indianapolis Zoo and presented with congratulatory letters from Gov. Eric Holcomb, Lt. Gov. Suzanne Crouch and NASA.

“The path gets very overgrown with weeds, and because it’s organic, they can’t put chemicals on the ground,” she said.

After meeting with the head gardener and a soil expert, she planned an efficient, organic and lasting way to prevent weed growth.

Before she could start tilling, she had to clear out the weeds.

“If you till nettle or thistle, then it just gets chopped up into 1,000 different new thistles,” she said.

She layered biodegradable cardboard and then woodchips onto the soil.

“It’s lasting and it’s working, so I think I helped (the garden committee) find a better solution.”

The idea for Rozmaryn’s project was formed when the wing connecting her old preschool and a Methodist church underwent construction.

“They had to break down a bunch of walls to do that,” she said, noting that a recently drawn mural was removed in the process.

“You walked in the building, and it was just these massive blank walls,” she said.

To make the appearance more inviting to visitors and children, she worked with the children’s ministry director to paint four new murals.

Utilizing the art style of a book from the preschool’s Bible study curriculum, she digitally planned a design and had it approved by the staff and preschool teachers.

With the help of volunteers, she painted four different Bible stories, including Noah’s Ark and the Garden of Eden.

In addition, she created an interactive sheet that contains story explanations, questions and scavenger hunts. She wants to show preschoolers that “art doesn’t just have to be something boring. It can have a story behind it.”

Dougherty and Rozmaryn want to continue spreading their influence next year. Dougherty aspires to make the National Honor Society, while Rozmaryn is encouraging her younger sister to follow in her footsteps.

“If you want to put in the work, it’ll have its benefits,” Dougherty said. “You’ll learn so much.”