You are at:Home»Current in Westfield»Westfield Community»Athlete of the Week: Guerin golfer Pfefferkorn seeks fourth state appearance

Guerin Catholic High School girls golf coach Mark Mathews expects senior Christina Pfefferkorn to have a successful senior season. But he wants her to enjoy herself along the way.

“Christina continues to improve her game. Her driver and second shots are a strong part of her game. (Her) short game and putting are also a strong part of her overall game,” Guerin coach Mark Mathews said of senior Christina Pfefferkorn. “Christina is self-motivated and a fierce competitor, and the fact that her sister is such a great player gives her extra motivation and inspiration to follow in her steps. My expectations for Christina’s senior year are to enjoy every minute with her team and play to the best of her ability. She can control both of those things and that will result in a great senior year.”

Mathews said he believes she will have a strong season because she’s a talented player.

“Christina is one of the most talented and well-rounded golfers that I have ever coached at Guerin Catholic,” Mathews said. 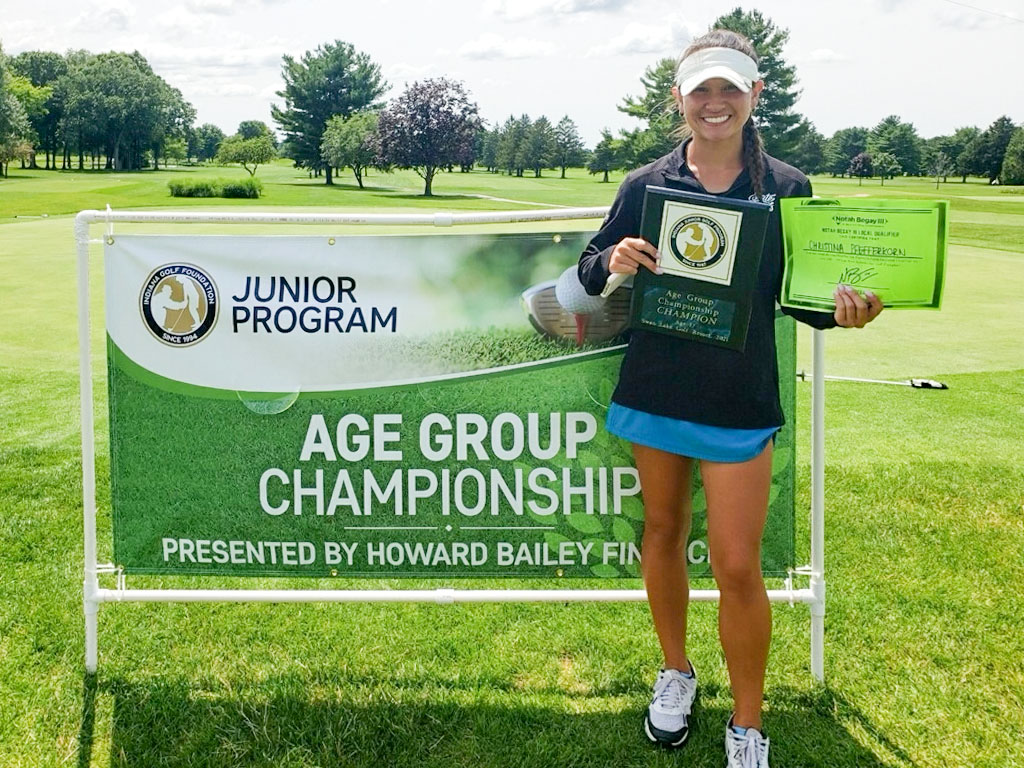 Pfefferkorn, a Westfield resident, was the medalist and helped the Golden Eagles to victory in the first high school tournament of the year Aug. 3 with a 77 at Maple Creek Country Club in Indianapolis.

“I struggled a little bit, but I brought it back together,” she said.

Pfefferkorn placed 10th in the IHSAA State Finals at Prairie View Golf Club in October 2020. She also competed in the state meet the previous two years, but 10th was her highest finish.

“My overall goal for the season is to place really well and make it to state,” she said. “Staying consistent with my swing will help me play really well.”

“Since last season, I think I made the most improvement in my short game,” Pfefferkorn said.

Pfefferkorn has some solid showings since the end of the 2020 high season. She said she is most proud about winning the IGA Indiana Jr. Age Championship 17 division title July 1-2 at Golf Club at Swan Lake Resort in Plymouth. She shot rounds of 71 and 73.

She tied for first in the IGA Jr. Master Tour Championship at Prairie View July 25-26 with a 74-72, but lost in the playoff, finishing second. She won the Golf Week Junior Tour title at Lexington, Ky. in March with a 74-80.

Her sister Angelica Pfefferkorn is a 2020 Guerin Catholic graduate who is a sophomore golfer at Oklahoma State University. Angelica was eighth in the state in 2019.

The sisters learned to play at the same time when Angelica was 6 and Christina was 4.

“We’ve always pushed each other to practice more and play harder against each other,” Christina said. “I played a lot of sports when I was younger, but as I grew up, I focused more of my time on golf.”