Sam Tiek has been eager for this opportunity since first watching “Newsies.” 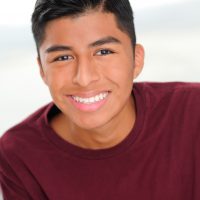 “I have loved ‘Newsies’ ever since I was 5 years old, and I saw it for the first time on TV with Christian Bale and David Moscow,” Tiek said. “I also loved watching the Broadway version of it. I have wanted to perform in ‘Newsies’ ever since.  I’m super honored to be playing JoJo.”

Tiek said he is excited to be performing in his first Beef & Boards show.

“It is challenging being one of only a few kids in the cast,” he said. “We have to keep up with all of these super-talented adults. It’s also fun, though. All of the adults are so nice to us, and we are so lucky to be a part of such a great group of people.”

Tiek said “Newsies” is a great story of teamwork, determination and perseverance.

“We could all use a story with a happy ending these days,” he said.

Tiek said his favorite number is “Carrying The Banner.”

“I think it’s a great way to start the show and introduce the audience to the ‘Newsies,’” he said. “It’s such an energetic song, and it really draws everyone into the show right from the very beginning.”

Tiek said he started acting when a talent agent saw him in a gymnastics class at age 5.

“I did a national commercial for USA Gymnastics at the age of 5, but my real passion for acting began in fourth grade when my drama teacher cast me as Timon in ‘Lion King Jr.,’” he said. “I have loved it ever since. My favorite roles have included Ren McCormack in ‘Footloose’ with Carmel Middle School and Lord Farquaad in ‘Shrek Jr.’ with Civic Theatre.”