You are at:Home»Current in Westfield»Westfield Cover Stories»The Rope Warrior: Westfield resident still getting a jump on career

David Fisher had some doubters when he made the decision to be a professional jump roper.

“I like to say my family was very lovingly discouraging in the beginning,” Fisher said.

Fisher, 57, the oldest of three brothers, often jokes that his parents had trouble explaining what he did for a living. His youngest brother is a University of Illinois professor, and his other brother has been named one of the top 75 intellectual property attorneys in California.

“When he started jumping rope, we thought it was a crazy idea,” Leland Fisher said. “He’s been jumping rope for 30-plus years. He’s been on the ‘The Today Show.’ My wife and I have been on ‘NBC Nightly News’ with Tom Brokaw. It’s an amazing story that someone can do this for a living and stay healthy enough to do it. He loves to teach, and he loves to teach kids how to be active and jump rope.”

Fisher, who goes by the nickname The Rope Warrior, loves what he does.

“I feel there are good messages in the show,” said Fisher, who moved to Westfield from the Chicago suburbs nearly seven years ago. “It’s been a passion of mine for an awfully long time. It would be a hard thing just to go get a normal job until I’m physically unable to perform anymore. I used to say the only suit I want to wear to work is a warmup suit.”

Fisher holds the Guinness World Record for most “rump jumps,” 56, in one minute. A rump jump consists of jumping while sitting and lying on the floor.

His story drew the attention of filmmakers, who recently released a documentary about Fisher called “The Rope Warrior.”

Fisher began jumping rope when he was 25 to train for volleyball. He had previously played club volleyball at Emory University in Atlanta.

“I fell in love with (jumping rope) because there are so many fun things you can do,” he said. “I started volunteer work with the American Heart Association with their Jump Rope for Heart program.”

From there, he found out about Showcase, which Fisher describes as a trade show for people who book school assemblies.

Fisher said 2009 was his best year financially because schools and businesses were still working off budgets from the previous year. Then things slowed for a couple of years because of the Great Recession. The demand increased again before the COVID-19 pandemic hit in mid-March 2020.

Fisher developed a virtual show that he marketed when in-person visits weren’t possible. So now, schools have a choice between virtual and in-person shows.

“I get the kids’ attention because I have been on a lot of national TV shows,” Fisher said. “I’m always asking the audience for input. It’s almost like jump rope improv where I’m taking suggestions from the audience and working it out with the people I have on stage. It keeps everyone really engaged.”

Fisher also performs at corporate events, college shows and halftime shows, including a few WNBA and NBA games. He was the featured soloist for opening ceremonies of the 1994 Goodwill Games in St. Petersburg, Russia. He also performed at President Bill Clinton’s second inauguration in 1996 and President George W. Bush’s first inauguration in 2000.

While on “Live With Regis and Kathie Lee,” he shared the green room with several other celebrities.

“Michael Caine was really nice to talk to and he stuck around and watched my performance, which I thought was pretty cool,” he said.

Fisher competed in Season 10 of “America’s Got Talent.” He performed his routine where he inflates a 6-foot balloon, squeezes his entire body into the balloon and jumps rope in the balloon.

“For the most part, they think it’s cool,” Fisher said of his career. “My sons used to perform with me when they were little, but they have their own activities and passion.” 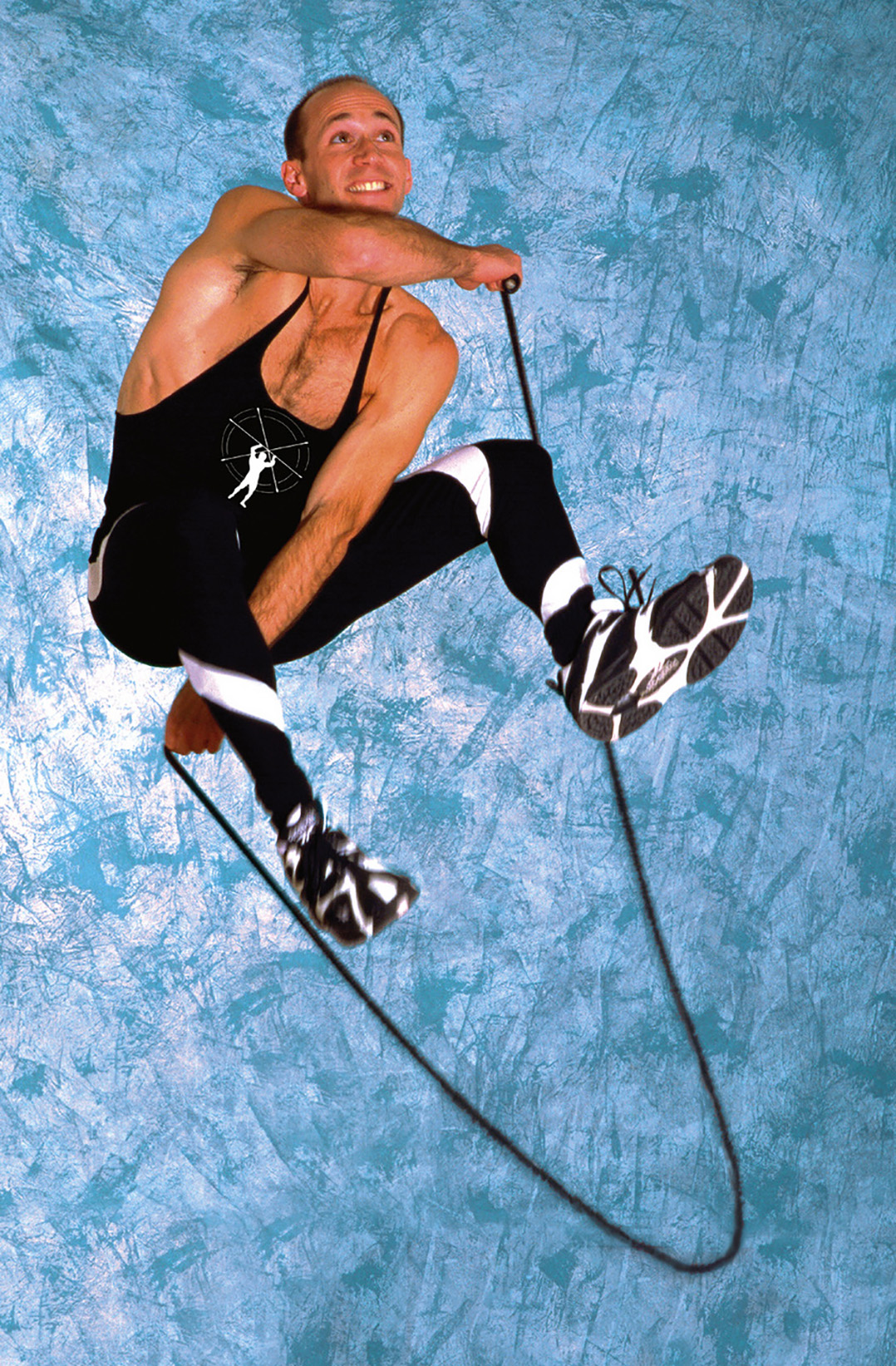 David Fisher has been able to continue his routine despite having two hip replacements. He had his first hip surgery in November 2018 and his second in November 2020.

“I could jump better than I could walk,” Fisher said before the surgeries. “When I put both feet together and pushed off both legs, I could jump. But if people saw me before or after the show, they would see me limping.”

Fisher said he doesn’t know if the jumping necessitated his hip replacements, adding it might be hereditary.

“The jumping doesn’t help, but I don’t know that it caused it,” he said.

Fisher said he is careful.

“Getting new hips is like getting new tires on a car. Depending how you drive the car, it will determine how long the tires are going to last,” Fisher said. “I can’t do crazy training regimens that are going to put wear and tear on my hip.”