You are at:Home»Current in Zionsville»Zionsville Community»Personal trainer knows how to use his head

Zionsville resident Kevin Shelley, 55, is a man of many talents, one of which is breaking toilet seats with his head.

Since 1999, Shelley has performed martial arts demonstrations on American TV shows, such as “Guinness World Records Primetime,” “LIVE with Regis and Kelly,” “Steve Harvey,” “America’s Got Talent” and “To Tell The Truth,” as well as TV shows in more than 40 nations. He has set or broken five Guinness World Records in martial arts, including the record for most pine boards broken across the forehead in 30 seconds with 32. 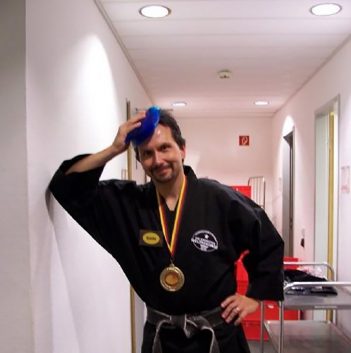 Kevin Shelley holds a towel to his forehead after performing a head strike. (Photo courtesy of Kevin Shelley)

“There was a show in the ’90s called ‘Guinness World Records Primetime,’ and they would showcase different world records and attempts,” Shelley said. “They had a guy on there breaking boards with his hand, and I thought it was kind of lackluster. And I’m not the type to complain, but I actually wrote a letter saying, ‘Hey, if you guys could showcase the martial arts a little better, that guy wasn’t breaking boards as fast with his hands as I could with my forehead.’”

Shelley said his phone rang a couple weeks later. It was showrunners asking for a demo tape of what Shelley called “flashy” head strikes. He sent them a tape and was brought on the show.

“Before I sent them the tape, I had never done more than one (head) strike in a row,” Shelley said.

Eventually, as he became a staple on TV shows, producers asked him to perform new stunts, which led to him breaking toilet seats instead of boards.

“A casting producer will see me on one show, (and) then next thing you know I’m on TV in over 40 countries,” Shelley said.

A black belt in traditional taekwondo, Shelley has practiced martial arts since 1979. He also runs his own personal training business, Shelley Fitness, which offers fitness, martial arts and sports training at the client’s home or business. Shelley Fitness serves residents in Indianapolis and surrounding areas. For more, visit shelleyfitness.com.

Despite performing such odd stunts, Shelley is a member of Mensa, a high-IQ society that grants memberships to people who are at least 14 years old and score in the top 2 percent in a standardized test, such as the ACT or SAT. He also has worked as an adjunct faculty with Ivy Tech for nearly 9 years.

Shelley has not retired from hitting things with his head, but he said he will wait for a TV to contact him in the future rather than seeking another appearance.