You are at:Home»Current in Noblesville»Noblesville Community»Athlete of the Week: Noblesville senior soccer player Palmer Ault aims for special season 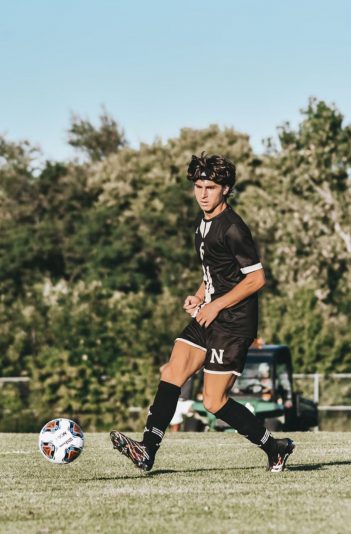 There is good reason Noblesville High School’s Palmer Ault was named one of the 60 high school All-Americans by the United Soccer Coaches after the 2020 season.

“Palmer has so many key qualities to his game,” Noblesville coach Kenneth Dollaske said. “He is tremendous at keeping possession in tight spaces, has vision to find passing lanes most players wouldn’t even notice, cracks thunderous shots that leaves opponent goalkeepers confused, and is deceptively quick, both with and without the ball. As he has grown throughout his time with our program, he has learned to embrace a captain’s role and make his teammates better on and off the pitch.”

A forward, Ault had 20 goals for the Millers last season. Noblesville has 13 seniors and several starters returning from last year’s 15-1-1 team. The Millers were ranked No. 1 in the Indiana Soccer Coaches Association preseason rankings. The season began Aug. 16.

“We’ve had added two great teams from Ohio that we’ve added to our schedule,” Ault said. “This is definitely one of the best teams in the state. We have the guys to do it and all the pieces around. It just comes with hard work each day in practice, pushing each other to be better players along with better people. Hopefully, we can make it all the way through October to win the state championship.”

Ault said he has improved his leadership skills.

“I’m trying to lead by example for some of the younger players,” he said. “From a tactical standpoint, I think I’ve improved upon my speed of play. Playing with some older, stronger guys helped me earlier in my career. Having some success at a younger age motived me to this is what I wanted to do.”

As a sophomore, Ault was named first team all-state. He played basketball and soccer through eighth grade.

“I enjoyed playing both and didn’t know which one I wanted to focus on,” he said. “When I got to high school, I decided to concentrate on soccer and pursue that goal wanting to play in college. If a professional chance happens, that would be awesome.”

Ault played for Indy Premier for several years but will join Indiana Fire Academy after his high school season.

“I wanted to cherish my last few moments I have with my high school teammates before we go to college,” he said. “I want to hone in on being able to play with them one last time.”

Ault said he hopes to make a college decision in the next two months.

“I’d say Butler is my No. 1 school,” said Ault, who also is considering DePaul, Loyola University and IUPUI.