Walking into the Legends of Gold wrestling gym inside Krav Maga Indy at 7264 Fishers Crossing Dr. Fishers, the stench of sweat is unmistakable.

A dozen teenage wrestlers are getting loose, preparing for another session inside the only Olympic developmental academy for wrestling for seventh through 12th graders in Indiana. Legends of Gold is looking to expand the program it already offers to kindergarten through sixth–grade program this fall.

But at the moment, master coach Nick Hull is scowling. He doesn’t think students are working quite hard enough.

“You think it smells (like sweat)  in here, you should visit our other gym in Indianapolis,”said Hull said, speaking fondly of the less pristine gym downtown

Hull oversees the two gyms as well as the wrestling team at Hamilton Southeastern Intermediate and Junior High schools.

While the two Legends of Gold locations differ in ambiance, both train students not just in the folk style of wrestling, which is used in American high schools and colleges, but also in the Olympic styles: Greco-Roman, which doesn’t permit any moves waist down, and freestyle, which allows the use of legs and looks more like the American folk style.

Hull founded Legends of Gold to help the United States compete on the global stage against nations like Russia and Iran, who train their wrestlers in Olympic–style programs and with high expectations from their youth.

“Here in the U.S., a kid would wrestle for their club. That’s one system. Middle school, that’s another system, and so on and so forth. By the time they even get to potentially make it to the international level, they’ve had five or six systems,” Hull said.

Hull, USA Wrestling’s Olympic wrestling director for the state of Indiana streamlines the process. The focus and emphasis of the coaching, Hull said, is developing wrestlers whose goals include competing on the senior level, beyond college and maybe on the Olympic stage.

One wrestler seeing the fruits of that type of training is Hamilton Southeastern High School senior Ryan Cast, who wrestled last year at 170 pounds. in the IHSAA state tournament.

“As I started in my sophomore year, I didn’t even make it out of regionals, and I wasn’t doing so well, but focusing on all the little details and making sure everything is perfect really made me up my game really fast,” Cast said.

Cast improved last year, advancing to the second round of semistate. He then wrestled freestyle and Greco later in the season, finishing fifth in the Indiana State Wrestling Association Freestyle finals.

Hull nitpicks the wrestlers he coaches. He wants them to perfect their craft. And wrestlers like Cast are up for the challenge because no one who trains at a Legend of Gold gym does so by being forced.

“Nobody really has to be here,” Cast said. “Since it’s optional, everybody works just a little bit harder because they are choosing to be here.” 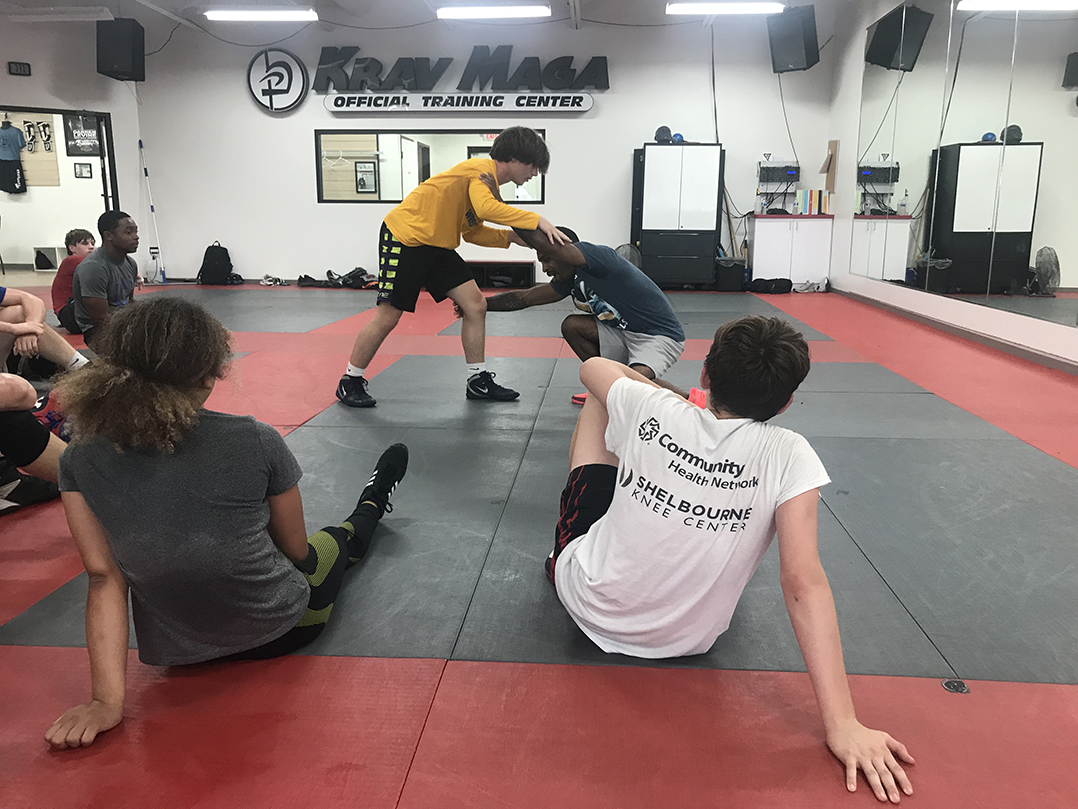 Nick Hull demonstrates a take down mover during a training session at his Fishers gym.

Nick Hull, the master coach at Legends of Gold gym, began his journey into wrestling by getting cut from the Lawrence Central baseball team.

“I was completely lost,” Hull said.

He tried tennis, but once he responded to a tennis coach by sneaking up behind him by grappling the coach to the ground. The coach suggested Hull try wrestling.

Hull loved it. He was third string as a freshman, but he liked the individual aspect of the sport. In the summer, while trying to improve, he gave the Olympic styles a shot.

“I binged on freestyle and Greco,” Hull said. “The next year, my sophomore year, not only was I on varsity, I ended up placing seventh in the state.”

Hull went on to win a state title in 1996 and was ranked third in the nation in his 112-pound weight class when he graduated. He was ranked No. 1 in the nation for a time. He then moved into coaching, first in college, then high school at Arlington in Indianapolis before settling into the gym he now runs.

In 2019, Hull returned to the mat and won a bronze medal in his weight class at the 2019 Veterans World Championships.