You are at:Home»Current in Carmel»Carmel Cover Stories»Putting it in motion: Carmel grad turns love of animation into video game career

Tori Campbell admitted she wasn’t much of a fan of video games growing up.

However, she was a fan of animation.

“I was a Disney nerd growing up,” she said. “You couldn’t get ‘The Little Mermaid’ away from me. It was more that (style of animation) or Pixar or ‘Finding Nemo’ or those type of animations.”

Now, the 2013 Carmel High School graduate is well immersed in the video game world as a full-time stage technician employee at 2K Games in Petaluma, Calif. She is working on titles such as “NBA 2K22,” “WWE 2K22” and other unreleased projects. She started with the company in June 2020, a month after receiving her master’s degree from Ohio State University.

“I work on the process of 3-D animation, combined with live performances from athletes or actors who come in for different types of projects,” Campbell said.

Campbell’s father, Tim Campbell, is an editorial cartoonist who started working for Current Publishing when Current in Carmel launched in 2006.

“I always kind of had that arts background growing up,” Campbell said. “From there, I decided how I could take that into the entertainment business, kind of geared toward film and movies. But it’s a very difficult industry to break into, and you have to get your foot in the door.”

“The project consisted of me working on stage with the talent, developers and director in order to create the dance sequence used,” she said.

Then, she interned at Activision Central Tech for three months in the summer of 2019 in Santa Monica, Calif., where she worked on “Call of Duty: Modern Warfare,” “Call of Duty: Black Ops Cold War” and “Tony Hawk’s Pro Skater 1 & 2.”

“Motion capture is an odd field in that it combines the need to constantly evolve one’s technical knowledge and work with people, performers and observers, that come from different disciplinary backgrounds and technical awareness,” Berezina-Blackburn said. “During the many demos, workshops and tours at our Motion Lab, Tori did a fantastic job communicating complex ideas and instructions, guiding the participants in a thoughtful and friendly way.”

Berezina-Blackburn said Campbell’s biggest personal accomplishment was her own collaborative project, based on the life of Ruby Bridges.

“This truly massive and timely effort resulted in a virtual-reality experience with lots of characters performed by the OSU student actors,” Berezina-Blackburn said. “Tori, along with her collaborator, conceptualized the project, did background research, identified and engaged several sensitivity/cultural experts, recruited the actors, worked with a movement coach to direct capture sessions, all on top of the technical work that went into processing and editing the motion data.” 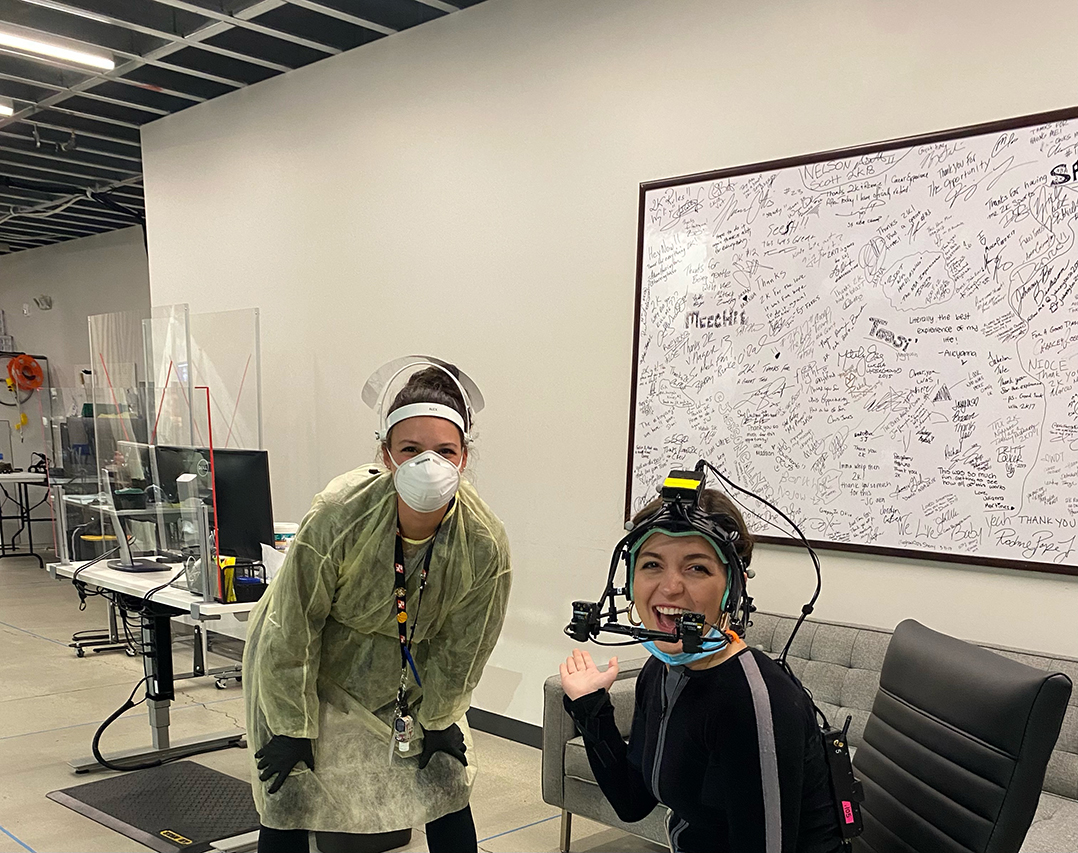 Putting it in motion

To begin a project, Tori Campbell said the game designer creates what they want to do with the game or storyline and sketches it out.

“When it gets to our part in the process, that’s when we are taking action with the actual human beings who are going to be playing whatever characters that are being played for the storyline,” she said.

The actors or athletes are put in a suit with gray reflective balls, called markers. The camera correlates the image into a skeleton, which captures their movement.

“So in NBA2K when someone wants to select (Dallas Mavericks star) Luka Doncic, we can do the exact moves he does,” Campbell said. “We’re not making it up as we go along. We actually get the talent in there to do those moves. We try to get who is on the cover. We don’t always get our cover athlete, but this year we were lucky and we got him.”

Doncic, who is on the NBA2K22 cover, came in to do the shoot right after the Mavericks’ season ended in the playoffs in June.

There are 18 members on her team, and Campbell said the members rotate through different positions.

“My favorite part is being able to make really good relationships with our talent, because we are there to make them comfortable,” she said. “Whether they are an actor or athlete, we get to know them as human beings and not just another co-worker for the day. To see how their performances translate into our animation is really fascinating. When people play a game, they don’t think about the person who is emulating the character.”

There are seven different stations and the stage technicians might alternate between them.

“With Luka, I was marking him up, making sure he had the right number of markers on his body, no less and no more,” Campbell said. “We were also setting up what helmet size would be the most comfortable for him to capture his facial data on set. We have to monitor his face in the shot.”

Campbell said there are probably less than 500 people who have a job like hers.

She has been able to embrace some video games.

“I like to play games I haven’t worked on,” she said. “If I work on a game here, I know the story because I’ve been working on it for the past two months. I’m enjoying ‘Cuphead,’ which has (older style) ’Steamboat Willie’-type animation.”