You are at:Home»Night & Day»Restaurants»At the table with Anna: Wilson’s Farm Market

Where to go: Wilson’s Farm Market 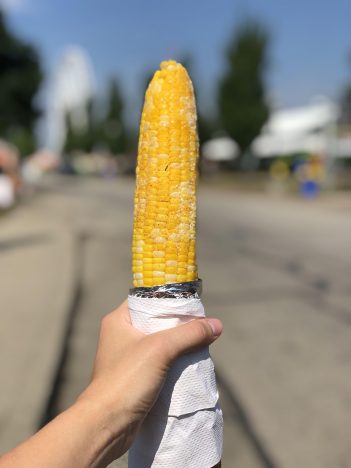 Corn on the cob at the Indiana State Fair was provided by Wilson’s Farm Market in Arcadia. (Photo by Anna Skinner)

What to get: Varies

Anna’s take: This picture is very obviously a corncob at the Indiana State Fair, but as I indulged in the buttery, salty goodness, I realized that Wilson’s Farm Market supplied all of the corn at the fair. I’ve only been to Wilson Farm Market once, and for a foodie, it’s practically an amusement park. The shop is just north of Westfield on U.S. 31, so it’s not too far of a drive. It sells fresh-baked pies, Amish goods, bakery items, produce and more. Stepping into the little store feels like something so purely Hoosier that I can’t wait to do it again. I suggest you take a trip to buy corn or any of its other items since the state fair has since ended. Give the Monster Cookie a try, or the blueberry pie. You’ll be happy you did.