Dramatic changes are proposed for the Meridian North retail and office center on the southeast corner of Meridian and 96th streets.

Landmark Properties has filed a request with the City of Indianapolis to rezone the 18-acre site for an eight-building mixed-use development containing commercial space, restaurants, a hotel and 600 apartment units.

Currently, the site contains 89,000 square feet of retail space and 71,000 square feet of office space. Built in the late 1970s, the site was anchored by Kroger supermarket until 2007. Life Time Fitness is in the former Kroger space but is not expected to remain when its lease expires this year.

“It is very unlikely that this leased premises can be filled by a single Class A tenant as changing market conditions and consumer demands have rendered the commercial development on the real estate, including the anchor tenant space, as antiquated and in some measure obsolete,” planning documents filed with the City of Indianapolis stated. 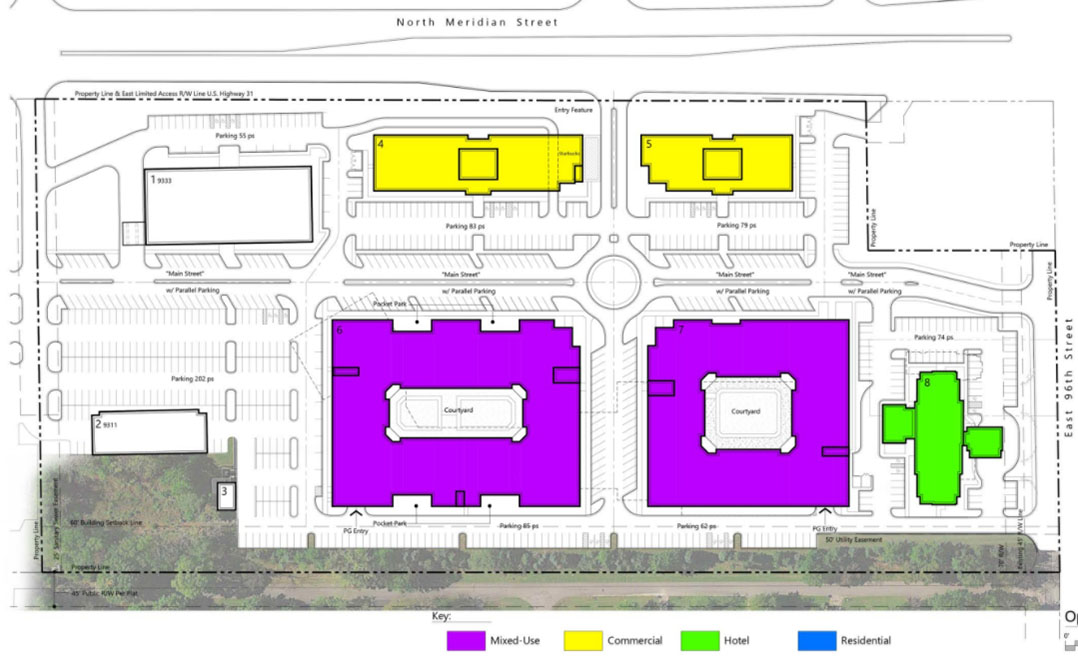 Landmark Properties is proposing a redevelopment at the southeast corner of Meridian and 96th streets that includes 600 apartments, a hotel and commercial space. (Image courtesy the City of Indianapolis)

Three existing commercial and accessory utility buildings on the south end of the site are expected to remain in place.

Planning documents describe the improvements to the site “as a long-term, multi-phase redevelopment” that will occur over “several or more years in part to accommodate existing tenant lease arrangements.”

The project, in Indianapolis but bordering Carmel, is described in the planning documents as “an important gateway Indianapolis property.”

Landmark Properties did not respond to a request for comment as of press time.

The Indianapolis Metropolitan Development Commission is set to hold a public hearing on the proposal at 1 p.m. Oct. 20 in the Public Assembly Room on the second floor of the Indianapolis City-County Building at 200 E. Washington St.