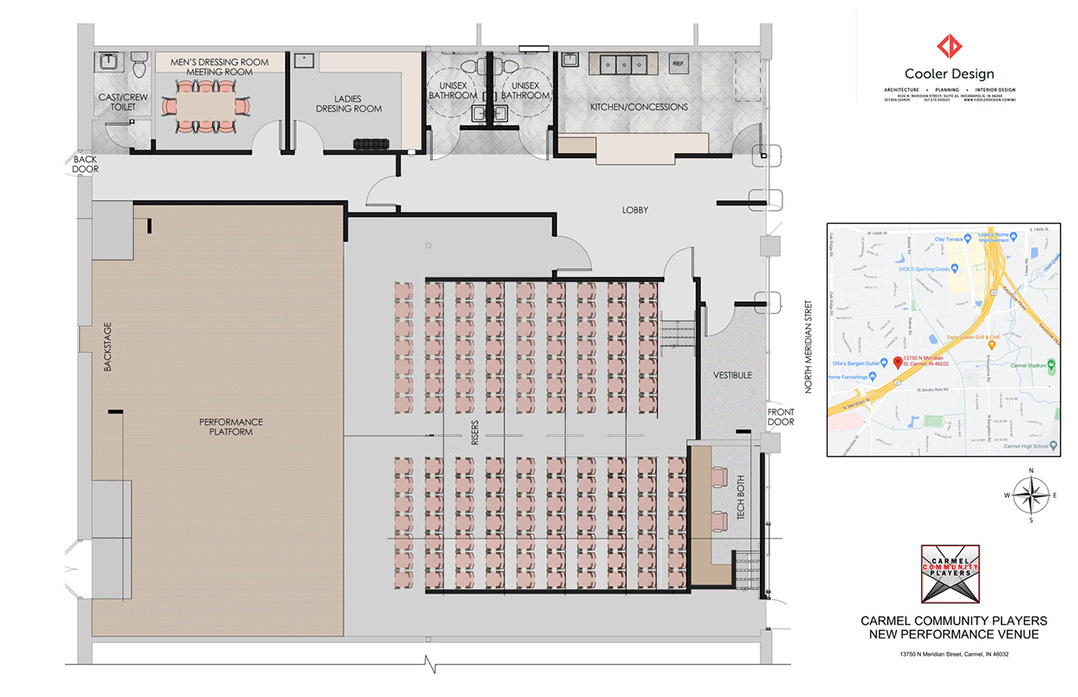 The Carmel Community Players has had a variety of homes throughout its 28-year history.

The theater group has staged performances in schools, churches, Studio 15, Clay Terrace and, most recently, at The Cat in Carmel. Now, the nonprofit theater group wants a new home of its own. CCP is launching a fundraising campaign Oct. 1 to raise $250,000 to pay for the build-out of a 4,200-foot rental space at 13750 N. Meridian St. CCP President Lori Raffel said the goal is to open in March or April of 2022.

“We are currently in the final stages of planning our campaign with the help of a CCP patron, a retired fundraiser, who volunteered to help us,” Raffel said. “We have already had a meeting with (Carmel) Mayor Jim Brainard, and he is very supportive and enthusiastic about our plans. The City of Carmel has been very supportive over the years of CCP through the (City of Carmel’s arts grant program.)”

“We love the location,” Raffel said. “It has good visibility from U.S. 31, plenty of parking for our patrons, and since 60 percent of our patrons eat or have a beverage out before or after a show, (being) close to Bier Brewery and Brunchies is a plus. We’re hoping we can work with the other tenants, particularly restaurants. From a practical standpoint, it has high ceilings. The landlord has also understood that we need to raise funds to create a first-class venue for our patrons.”

Raffel said the group engaged Cooler Design, a professional architect, to help with planning the space.

“They are assisting us with the design, along with all the permits and regulations that go along with an assembly space,” Raffel said. “Our current plan is for 133 seats. We will have a slightly raised stage and risers for the theater-type seating.

Raffel said the stage would have 90 percent more area than the stage at The Cat.

“This will allow us to perform larger productions and host groups that need more stage area,” Raffel said. “Rehearsal space is a constant problem for theater groups. We are planning space to allow not only our actors but other groups to rehearse. Pedcor is graciously allowing us to rehearse in the old Woods Wire building for free, but a large permanent space is currently not available elsewhere in the Carmel area.”

Raffel said the new space will expand the arts in Carmel.

“Not only will we be able to expand our productions from two weeks to three weeks, we plan on expanding our programming to include theater stagecraft workshops and training, along with a staged reading outreach to senior living facilities,” she said. “Theater tech people are a tough commodity to find, so we decided to train them — sound and light design, set design, stage management, etc. — and keep them in the area to work with us again and again. We are theater people, so we will find a way to do theater, which is what we’ve done. Having our own venue just makes it that much more rewarding.”