Sandra Fortier wants to create a guide for others on how she has navigated her life.

Fortier, who is legally blind, was born two months premature in February 1949. She was in the hospital for two months because of her inability to gain weight, which forced her to stay in an incubator. 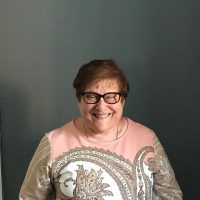 “Doctors said the oxygen in the incubator caused the retinopathy,” Fortier said. “As I grew up my vision was 20/200 (legally blind) from my adult life, except when I had cataracts and it decreased to 20/400.”

Fortier grew up as the only visually impaired student in a small public school in Alpena, Mich., during the 1950s and 1960s.

Fortier’s autobiography “See? Living Blind in a Sighted World” describes how she overcame the obstacles. The book was published in July by Braughler Books. Fortier moved to Carmel three years ago to be near her twin sister, Nancy Fezzey.

Fortier’s mother would take her by bus to Detroit to see a specialist every three months from the time she was 2 to 4 years.

“My mother said my eyes must have been changing because every three months I got a new prescription,” Fortier said.

Fortier said she had an exceptional science teacher in eighth grade.

“He was perceptive enough to realize the problems I had being legally blind,” Fortier said. “Forty-seven years later, my sister said she wondered if he was still alive. She helped me find his email address online. I described to him the challenges I had going to college and finding work. He said, ‘You have a way with words, why don’t you share your experiences and insights about blindness in a book?’ I thought at first, ‘You must be looney, what would I write in a book?’ He said, ‘Trust me, write things down as you remember them.’ But it took 12 years to write.”

Fortier said the Alpena school system at that time was inadequately prepared to meet the needs of a visually impaired student.

Fortier said she was fortunate her late mother was a strong advocate. Fortier said one issue was whether to attend a residential school for the visually impaired in Lansing, Mich., or to mainstream her education.

“My doctors and parents were 30 years ahead of their time. They thought to aim toward mainstreaming because I would have to compete with normally sighted people when I looked for work, anyway,” she said. “No parent should have to contend with the lack of resources if they want their child to get a good education.”

Fortier’s book relays information on how to access services for the blind.

Fortier attended Alpena Community College for two years before transferring to Michigan State. She said she was determined not to end up in a dead-end career.

Fortier originally wanted to teach the blind but had difficulty taking control of a regular classroom when student teaching.

“It took me a long time to develop the assertiveness I need to advocate for myself,” she said. “After the student teaching debacle, I lost so much confidence in myself.”

With adaptive computer equipment, she eventually began working as a word processing assistant at a Michigan rehabilitation center for the blind in Kalamazoo.

Fortier’s book is available through Amazon, Barnes & Noble and Alibris.