You are at:Home»Current in Westfield»Westfield Cover Stories»Steel resolve: Westfield man says life is ‘as normal as can be expected’ after recovery from metal beams piercing skull

The last thing Bob Parker remembers seeing on Nov. 3, 2020, is a trailer-truck carrying steel beams swerve away the Michigan Road off-ramp and into Parker’s lane on I-465 eastbound. Then, everything went dark.

Although the 55-year-old doesn’t remember the impact, he rear-ended the trailer, and the steel beams hanging 7 feet off the back of the trailer pierced his front windshield and his skull. Parker, who lives on the Westfield/Cicero border, was working at the time. His company, Parker Machinery, installs industrial manufacturing machinery. He had left a project site in Speedway and was heading to another in Noblesville. Parker’s truck was traveling 66 mph when it hit the trailer. 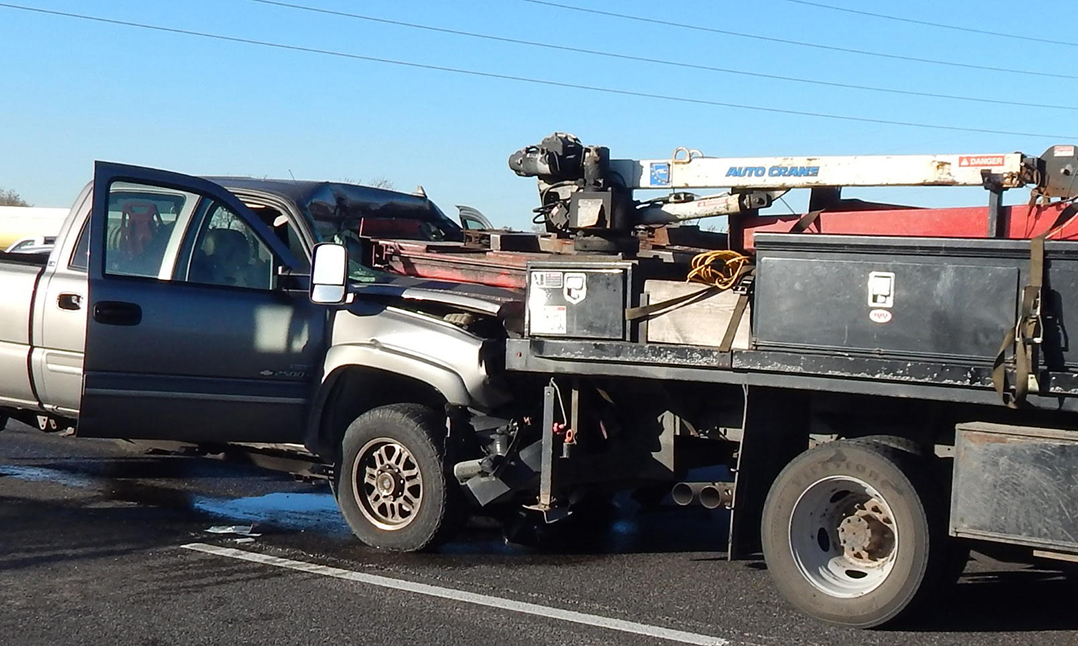 An EMT stopped in traffic realized Bob Parker was alive after a car accident in which steel beams pierced through his skull, and the EMT began an extrication process. (Submitted photo)

One of the Indiana State Troopers responding to the scene, whom Parker later met, was certain Parker was dead at the scene.

“I was laying in my truck with the beam in the truck and my seat mashed back 15 inches,” Parker said.

Fortunately, an EMT was stopped in traffic behind Parker. The EMT arrived on scene and actually spoke to Parker. He doesn’t remember the interaction, but he was able to tell the EMT his name.

The EMT started extracting Parker from the truck, after which Parker’s pulse stopped. First responders intubated him at the scene as they waited for an ambulance. Parker was then transported to Ascension St. Vincent Hospital – Indianapolis at 86th Street. 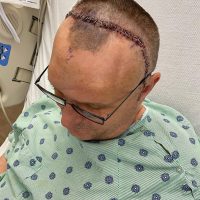 Ten days later, Parker woke up from a coma. The beams had damaged his right frontal lobe, which, according to Goodman Campbell Brain and Spine neurosurgeons, is the part of the brain that recovers the easiest. When Parker’s wife. Angie. was notified of the traumatic brain injury, she wasn’t sure how Parker would respond when he woke up. However, his first words to her were “Hey, babe.”

“When he came out of the coma, we weren’t sure if he would know who he was or who I was or his children or if he was going to know his family. We waited 10 days for him to wake up,” Angie said. “When he woke up, I walked in the room and he said, ‘Hey, babe,’ and that was my first indication that he was OK.”

Because of significant brain swelling, surgeons couldn’t operate to repair the damage to Parker’s forehead, eye socket and the right side of his skull until the swelling decreased. Dr. Charles Kulwin, a neurosurgeon with Goodman Campbell Brain and Spine, said Parker was stabilized and then sent to rehab.

“We wanted to let him go to rehab to see what level of brain recovery we could get,” Kulwin said. “The reconstruction surgery involves taking away part of his head and lifting the brain up, and those are things you don’t’ want to do with a freshly injured brain.”

When Parker began rehab, he had no vision in his right eye and he also lost short-term memory. However, his vision eventually started to return. Kulwin said reconstructing the skull and restoring a working eye socket is a much more difficult surgery than if the vision had been lost and the eye socket didn’t need to support a working eye, so the team of surgeons, consisting of oculoplastic surgeons and neurosurgeons, including Kulwin and Dr. Ben Campbell, began two months after the accident.

Since the accident, Parker has regained most of the vision in his right eye, although he does have double vision that will be corrected at a future surgery. He wears an eye patch when he needs to concentrate, but he said the brain is “amazing” with how much it compensates for the double vision.

Parker said the hardest thing to recover is the short-term memory loss.
“My short-term memory was nonexistent to start with. It was tough to have a conversation and not remember what was initially said,” Parker said. “As it began to correct itself, I started doing sudoku puzzles and brain exercises.”

An engineer by trade, Parker even taught himself programming languages from scratch. Although he hasn’t returned to work, Parker said his life is “as normal as can be expected.” He expects to eventually return to work and drive again when he is medically cleared to do so.

Parker will speak at 10:55 a.m. The event includes vendors, educational booths, a blow-up mega brain and a survivor tribute. The race raises money for the Goodman Campbell Brain and Spine Neurosurgery Foundation. Funds will go toward research and follow-up care.