You are at:Home»Current in Geist»Geist Cover Stories»Deliveries from above: DroneDek establishing HQ and the next generation of mailboxes in Lawrence

If DroneDek CEO Dan O’Toole has his way, the plastic mailboxes across the City of Lawrence will eventually disappear.

DroneDek produces high-tech boxes designed to securely receive deliveries from everything from packages delivered by drivers to items from drones and automated road vehicles. The boxes can be heated or cooled for packages that need to be kept warm or chilled.

Lawrence is poised to become a test market for the DroneDek delivery boxes.

“We’re excited to be at the forefront of that,” Mayor Steve Collier said.

Although a launch date hasn’t been announced, DroneDek is in the process of constructing a headquarters at 4423 N. Shadeland Ave. in Lawrence.

“We love Lawrence. It’s a very welcoming, tech-centric community. Great location. Everything you could want as an entrepreneur in a municipality is what Lawrence is,” O’Toole said. “We’re working on completing our site there. It’s a major build-out.”

O’Toole, a Carmel resident, initially self-funded DroneDek, but a couple of friends invested a combined $400,000 to support the venture. Shortly thereafter, they launched a crowdfunding campaign and received so many donations that DroneDek maxed out twice, raising a total of $3.6 million. According to O’Toole, as of January, the previous maximum that an entity could raise through crowdfunding was $1.7 million. Through all fundraising avenues, the company has raised $6 million in in a little more than 10 months.

“I think that’s a great validation of what we are doing and how the market is accepting us,” O’Toole said.

The DroneDek box does more than receive deliveries. It is outfitted with emergency technologies that can summon emergency personnel and emit lights to alert first responders of the owner’s location in case the owner has an emergency near the delivery box. The DroneDek also can alert the owner of deliveries through a companion app. It can stream live video and has facial recognition technology that can help locate missing pets, O’Toole said.

O’Toole landed the first patent for a box designed for drone delivery.

O’Toole came up with the idea for the boxes when he was driving home from a meeting in Chicago.

“While driving down I-65, I saw someone flying their drone out in a field, and it got me daydreaming about drone delivery and how awesome that will be,” O’Toole said. “You can’t just drop things in someone’s yard, or on their porch or patio, or in front of somebody’s business. I started thinking about what the next generation of mailboxes would look like for deliveries by drones. By the time I got home I was just bubbling over with ideas.”

O’Toole has a theory that whenever someone has an idea, at least 10 other people simultaneously have the same idea, so O’Toole raced to create a design and file a patent. He received it in 2017.

“I beat Amazon to my patent by nine days, the (U.S. Postal Service) by two weeks and other companies by less than a month,” O’Toole said.

Since 2017, the company has tested models with beer delivery at a golf course in Michigan, a burrito delivery in South Bend and last month delivered chicken wings to the annual police and fire wing eating contest during Lawrence’s Community Day.

“It’s definitely still a startup, but it’s a startup with unlimited potential,” Collier said. “It’s an industry that could become burgeoning very quickly. It reminds me of personal computers and Macintosh’s being developed in a garage. This is one that is probably not that iconic, but it’s one that certainly has a baked–in following to be able to have delivery that quickly.”

DroneDek must still overcome some challenges. The company has to manufacture large quantities of delivery boxes. Also, for Lawrence to become a full-blown drone delivery hub, there needs to be tremendous coordination between DroneDek, the city and the Federal Aviation Administration, because flight plans for drones still need to be logged.

“We can’t just fly (drones) wherever we want to,” Collier said. “One of the issues we have in the center of Lawrence is that we have the Defense Building along 56th Street. They have a very restrictive flyway. If a drone would happen to incur upon their airspace, they’d bring it down immediately. There have been several drones that have been brought down that way.” 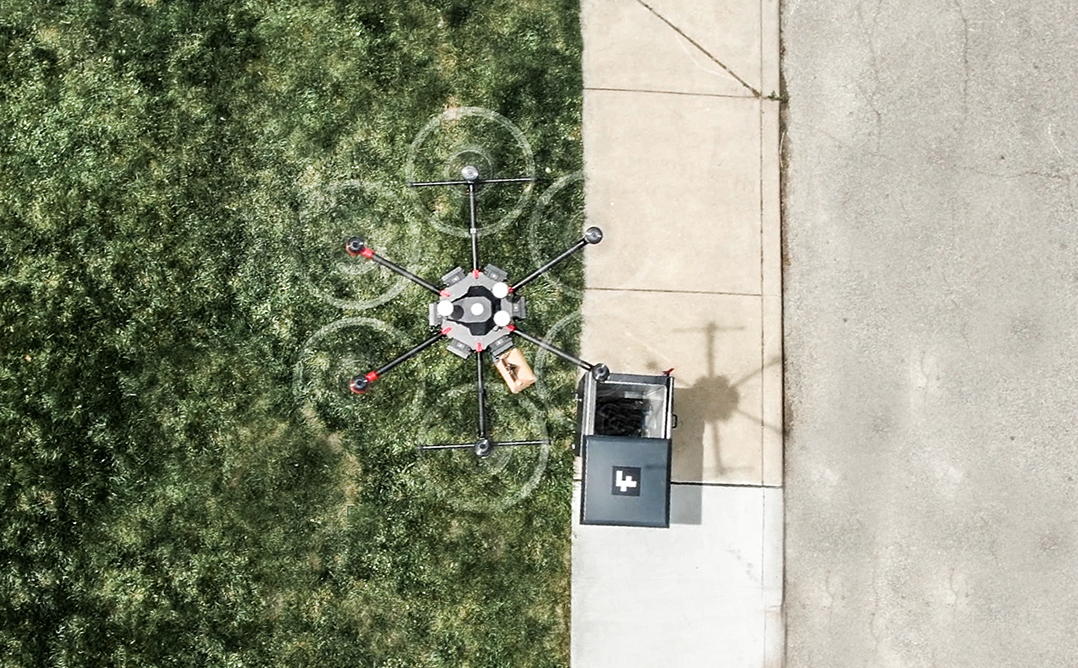 An aerial view of the drone lowering a package into a DroneDek box.

DroneDek, another sign of Lawrence’s rise as a tech hub

With Lawrence being on track to become a test hub for DroneDek delivery boxes, Mayor Steve Collier sees that step as further affirmation of Lawrence’s evolution as a hub for technological innovation.

“It just fits right into the message we are sending out about the City of Lawrence,” Collier said. “Anything that reenforces that as our focus is good for us.”

Whenever DroneDek boxes are operational in Lawrence (a timetable is still undetermined), Lawrence will become the second city in the U.S. to be actively test drone delivery units. Christiansburg, Va., was the first.

In June 2020, Lawrence was awarded the Rising Tech City Mira Award, which celebrated the Fort Benjamin Harrison area, and Lawrence overall, in part for its ability to attract and retain a growing amount of tech companies.