A Carmel grandmother is sharing her recollections of “colorful and sometimes silly quotes from kids about swimming and much, much more” in her new book, “Out of the Mouths of Babes.”

Charlene Shropshire, or Miss Charlene, as she’s commonly known, taught swimming after retiring from a career in real estate. She spent more than seven years giving swim lessons at Five Seasons and another seven years teaching at Bridgewater. 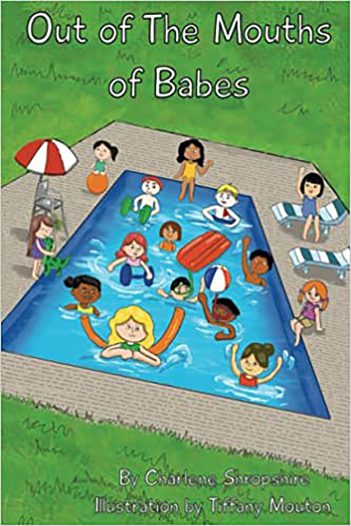 “It’s a combination of the swim coaching and being around children,” Shropshire said. “They are just so honest and sincere and often don’t realize they are humorous.”

The reason she decided to write the book is simple.

“I thought these stories were just too cute to keep to myself,” she said. “I just wanted to share the joy with readers.”

Shropshire will have a book signing at 1 p.m. Oct. 16 at the Carmel Clay Public Library, 2140 E. 116th St. Books will be available for purchase that day and also can be found on Amazon.

Shropshire started taking notes “years and years ago” and continued to build a list. Last year, she hired an editor to help her finish the book, which was published in April.

One story is about a little boy who couldn’t decide who he wanted to marry when he grew up.

“One youngster told me he loved me, but he also said he loved another girlfriend and his mother, and that he planned to marry all three when he grew up,” Shropshire recounts in the book. “His 5-year-old sister immediately slammed her hands on her hips and said, ‘He doesn’t even know he can’t marry more than one girl at a time.’”

The book is illustrated by Tiffany Mouton, a student at Herron Art Institute, who is a friend of one of Shropshire’s granddaughters.