Camelia Ignatencu of Romania is a long way from home, but that’s the point for participating in the AFS-USA foreign exchange program.

Ignatencu, 17, is living with Noblesville residents Brian and Stephanie Laskey and attending Sheridan High School during the 2021-22 school year.

“I wanted to learn about America and experience the culture. I have lived in many places and love experiencing cultures,” Ignatencu said.

Ignatencu is fluent in seven languages. Her family is from Russia, and she lived in Spain for a short time. She arrived in the U.S. Aug. 5 and started school Aug. 9. In less than two months, she’s already visited the Indiana State Fair and participated on the Sheridan High School volleyball team. She plans to travel to Disney World during Sheridan’s fall break later this month.

The Laskeys decided to host an international exchange student after adopting their son, Aiden.

“My wife and I built our family through adoption. We have a 4-year-old son named Aiden adopted through domestic infant adoption,” Brian Laskey said. “That was a long and arduous process, and we knew we wanted to continue to grow our family, but we didn’t want to do adoption again just because of the financial impact. And Aiden’s at an age where bringing another baby into the house would be hard. We knew we weren’t done growing our family, so we thought about fostering, but there’s a lot of emotional tolls that happen with that, so we thought we could participate in an exchange program and host a student for a year.

“It’ll be sad when she leaves, but she’s leaving for a good reason, and she’ll get to go home.”

Laskey said the family wanted to host a student last year, but the COVID-19 pandemic delayed their plans. The family was matched with Ignatencu through the AFS-USA program. AFS stands for American Field Service.

Since the family lives in Noblesville, Laskey said he hoped Ignatencu could attend Noblesville High School, but because of the pandemic, the school district had established parameters for international exchange students that made the process difficult. So, the Noblesville family drives Ignatencu to Sheridan High School every weekday for classes.

“(Noblesville) put a lot of additional lockdowns on exchange students, and one of the items they put on that was, in order to be a host family in Noblesville, you had to have a high school student yourself,” Laskey said. “Our son is only 4, so we are not able to host with Noblesville, so hopefully that policy will change. Sheridan has been absolutely fantastic and a great district to work with.”

Laskey said the family rises at 6 a.m. each morning to get Ignatencu to school by 7:25 a.m.

Sheridan High School turned out to be a blessing for Ignatencu because its enrollment is only 250 students at the school, and she didn’t want to attend a large school. Her private school in Romania only has four students.

“I think it’s been a great experience. It’s amazing to share America with someone else, but then also to learn so much about another culture,” Laskey said. “It’s great to learn about another part of the world, so we love that. She’s just a great kid. She’s very smart. It’s just incredible to see how mature she is already.”

One thing Ignatencu hasn’t been able to experience as frequently as she wants is riding the yellow school bus. However, since she is on the volleyball team, she gets to ride the bus to road games. 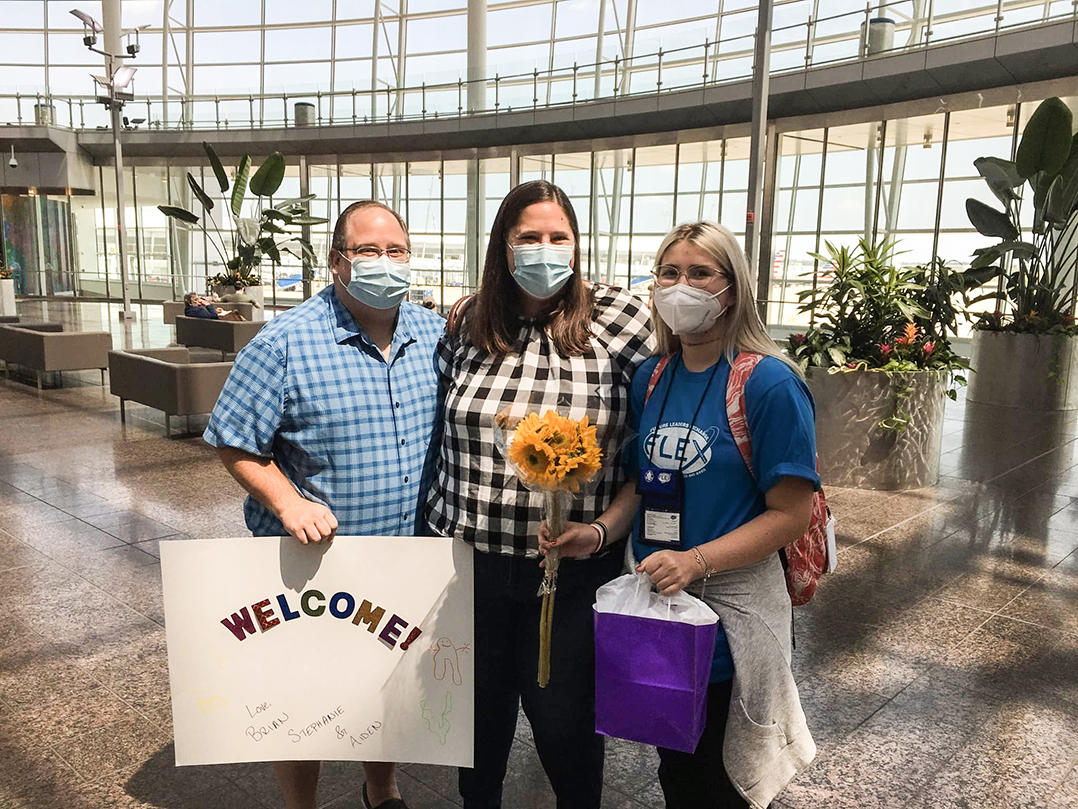 From left, Brian and Stephanie Laskey welcome Camelia Ignatencu to America on Aug. 5.

Biggest challenge about America: “Besides getting my cellphone to work, I would say it has been the lack of public transportation.”

Best thing about America: “Getting to do so much. Going to Chicago. (Playing) volleyball.”

The biggest difference between America and Romania: “The schools here are so much bigger.”