You are at:Home»Current in Westfield»Westfield Cover Stories»Walking to remember: Westfield woman remembers mother through participation in Walk to End Alzheimer’s

Participating in the annual Walk to End Alzheimer’s is important to Westfield resident Traci McGaha and her family. McGaha’s mother, Sharon Harris, died in November 2020 at age 66 from frontotemporal dementia, an uncommon type of dementia that causes problems with behavior and language.

“We walk because that was her favorite thing. She used to walk for miles,” McGaha said. “When my dad interviewed caregivers to help with her, he would ask if they were in shape and let them know they would be walking miles a day to keep up with her.”

Taking part in the walk not only is a way to keep the memory of McGaha’s mom alive but also raises awareness of the disease.

“I hope that during my lifetime I get to see them ‘raise the white flower,’ which means they found a cure. It’s a very slow way to deteriorate and it is very difficult on the caregivers,” McGaha said. “I saw the toll it took on my dad. One day he was taking her car keys away from her and the next day turning locks around at home to lock her in the house so she couldn’t wander off.”

Harris was diagnosed when she was 61. The family first noticed something was wrong when Harris started forgetting to do things.

“We wondered if it was because of her recent retirement and if she was bored or depressed because Dad was still working and she was spending time alone,” McGaha said. “I had gotten engaged, and when my sister was married, Mom was very much involved. Party planning was a hobby of hers. But Mom would forget to call the photographer and not remember things, so that was kind of a red flag. Her personality was changing and was so different and we knew something was wrong but didn’t know what it was because she looked perfectly normal.”

Harris moved full time into a memory care facility in Battle Creek, Mich., in 2019. When the COVID-19 pandemic prevented in-person visits, McGaha would bundle up her toddler twin boys, Thomas and Austin, and drive to Michigan to visit from outside the window.

“We would bring balls for the kids to play outside the window and we a decorated the tree outside for any holiday – Halloween, Christmas, Easter. I am not sure if she had the understanding that they were her grandchildren or if they were just cute kids, and she got really excited when they came to her window,” McGaha said. “I think that at least gave her a familiarization of who we were still and gave her something to do, and I think it helped us process, too.”

During those visits, McGaha shot video of the twins and their grandmother.

“My gut just told me I should probably take a video of this one, and when we went to say goodbye, I choked up a little, and when I lifted them up the last time you can hear them saying ‘Love you, Mimi,’” McGaha said.

The memory of Harris is kept alive for the twins on the shirts they wear for the walk. The shirts have a purple ribbon on the front and the phrase, “We walk for Mimi” on the back.

McGaha’s advice to anyone who has a loved one battling the disease is simple: “Concentrate on the memories you can make and the things you can do.”

Walk to End Alzheimer’s Director Julie Moore said the event is important because the disease can be isolating.

“Being able to come together again to fight this disease is important because it reminds people that they aren’t alone and that there is hope,” Moore said. “Many participants tell us they are walking not only to support those who are living with the disease and honor those they have lost, but also for their children and grandchildren. They walk in the hope that the next generations won’t have to face this disease.”

The Walk to End Alzheimer’s was Oct. 2 at IUPUI’s Michael A. Carroll Stadium in downtown Indianapolis. For more, visit alz.org/Indiana/walk. 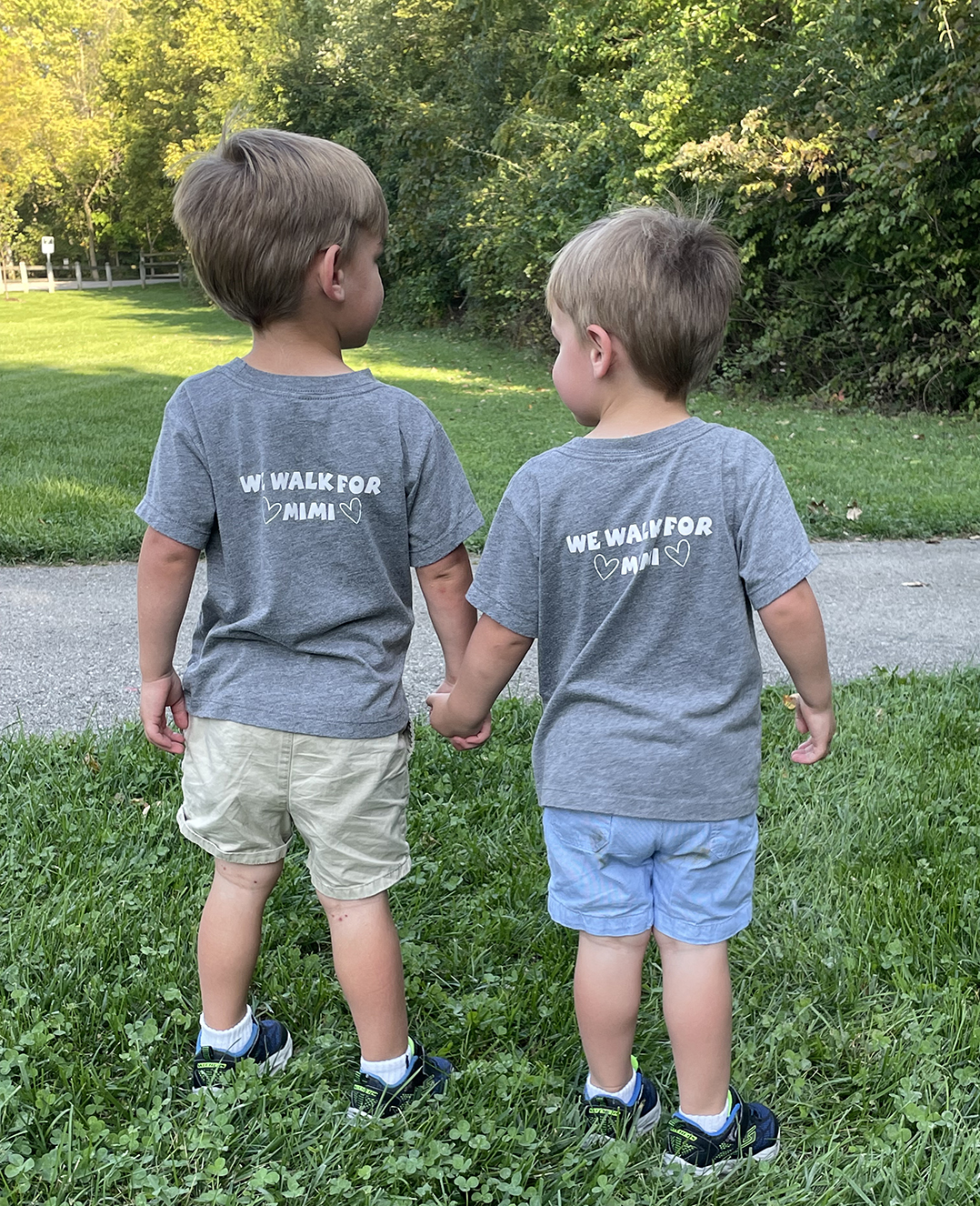 Favorite destination: Either Florida or Ireland

Food she could eat every day: Chips and salsa

Favorite way to relax: “I have twin toddlers. What’s (relaxing feel) like?”