When China Forbes’ former Harvard University classmate Thomas Lauderdale contacted her about being a vocalist in a band in 1994, she had no idea what would eventually transpire.

“I didn’t even think we would make an album,” Forbes said. “It was just this fun band he put together to play at political fundraisers and events in Portland. They were playing all covers, not originals. It was just a fun party band with a cocktail flair.” 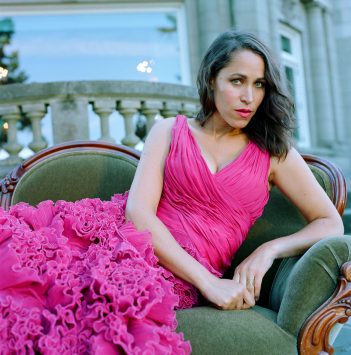 China Forbes is the lead vocalist for Pink Martini, which performs Oct. 23 at the Palladium. (Photo courtesy of Pink Martini)

Twenty-seven years later, that band, Pink Martini, is still going strong. Pink Martini will perform at 8 p.m. Oct. 23 at the Palladium at the Center for the Performing Arts in Carmel.

Forbes said Lauderdale, a pianist, had an idea to sing songs in their original languages. The music is a multilingual mix of jazz, classical and old-school pop music.

“There was a spirit of inclusion always,” she said. “Thomas saw beyond Portland.”

Forbes, who has made Portland her home, has sung songs in more than 25 languages.

“I grew up with a French grandfather, and my father always wanted to speak French with me,” Forbes said. “I studied French from seventh grade on, but I never became fluent because I never got to live there. I studied Italian in high school because I wanted to sing opera. I lived in Rome as a mother’s helper.”

Forbes was an actress and a singer-songwriter in New York when Lauderdale first called her. She went back and forth between Portland and New York the first few years. Forbes had been in a drag queen film.

“It was an over-the-top film, but we went to Cannes Film Festival for the movie,” Forbes said. “I got asked to sing a song at a party, and Thomas asked if he could come as my accompanist. We thought we should bring Pink Martini here to play, because so much of our music came from films in the early days.”

“My little drag queen music proved to be the springboard,” Forbes said. “The film ‘Franchesca’ is hard to find. I think the only place it exists it is dubbed into Italian, which makes it seem better.”

Forbes and Lauderdale began writing more songs together and collaborating with others. Forbes said Lauderdale has become a very good songwriter.

“I write all the time, but when I have a backlog of songs that are waiting to be recorded and released, I kind of slow down because I don’t want even more of a backlog,” Forbes said. “I’m working on a solo album now and I have a lot of songs that I love.”

When Forbes had vocal cord surgery in 2011, Storm Large joined the band as a temporary replacement. She eventually began splitting time with Forbes because Forbes didn’t want to be on the road as much when her son was younger. Forbes does the majority of the concerts now.

“My son is 12 ½, and it was really amazing to have this time together when the world was in lockdown (amid the COVID-19 pandemic) and people suffering,” Forbes said. “It was such a confusing thing to be happy to be home at that moment. I had never been with my son for so long. Since he was born, I’ve been touring periodically.”

Unlike bands who perform in support of an album, Forbes said the band keeps touring.

“We promote all of our albums. It’s non-stop touring,” Forbes said. “We’re lucky to be at this for so long and still have an amazing fan base and play such amazing (concert) halls.”