You are at:Home»Current in Carmel»Carmel Community»Carmel woman wants others to know it’s OK to ‘go flat’ after breast cancer

Fewell, 49, who had radiation complications after being diagnosed with Hodgkin’s lymphoma in 1989, decided to have a double mastectomy without reconstruction surgery.

“I was a high-risk protocol the last few years at Simon Cancer Center at IU Health, which meant every six months and I had an MRI or 3-D mammogram,” she said. “At that time, I started researching options. I didn’t feel like reconstruction was what I wanted to do, personally.” 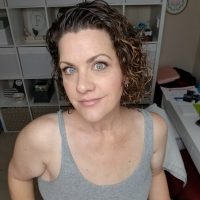 Fewell said she knew too many of the risks involved with implants.

“I had enough medical complications to know I didn’t want any of that, nor did I want to have extra surgeries, so I chose to go flat because it was one surgery and I was done and could get my life back to my normal,” Fewell said.

Fewell was diagnosed with invasive ductal carcinoma, the most common form of breast cancer, in October 2019 and had a double mastectomy at IU Health in December 2019.

“We knew even if we removed it, it would be a high risk to come back,” Fewell said. “So, mastectomy was my best option, and for me, going flat was the best option.”

“To have to make the decision to basically amputate your breasts is what you’re doing,” Fewell said. “It’s an aesthetic flat closure.”

Fewell said she is not anti-implants, but her goal during Breast Cancer Awareness Month in October is to let women know there are options. She said many times women are only offered reconstruction.

“I want women to know aesthetic flat closure is a beautiful option, typically an easier one, because you don’t have multiple surgeries,” Fewell said. “I didn’t want multiple surgeries. I think a lot of people think reconstruction after breast cancer is just like having breast augmentation, voluntarily increasing your breast size. Those two are very different surgeries and the outcomes are very different.”

Fewell said she has never questioned her decision.

“My husband, Kirk, supported me through all of it,” Fewell said. “He’s been amazing. My family supported me through all of it. Flat closure has been around for a long time, but it’s not been discussed. Unless you knew what to ask for, you wouldn’t get the option of having it done. Most of the time when a woman is diagnosed with breast cancer, she goes in and talks to her breast surgeon (who says), ‘You’re young. You’ll want breasts.’ I know 70-year-old women that have been told this. Sometimes it’s true, they do and that’s an option, but they also need to know having flat surgery does not make you less of a woman.

“I feel more confident in who I am today than before because I got to make an empowering choice. It was my decision, and it was the absolute best decision for me.”