You are at:Home»Current in Carmel»Carmel Community»Carmel golfer, 10, to compete in Drive, Chip and Putt Nationals at Augusta

If you receive an invitation to play golf at the Augusta National Golf Club in early April, you are, simply put, an elite golfer. Ten-year-old Carmel resident Maya Fujisawa Keuling already has her invite in hand for next spring.

Augusta is the site of the Masters Tournament, the preeminent golf championship of the year. Maya, a fifth-grader at Cherry Tree Elementary, will be in Georgia on April 3, 2022, competing in the Drive, Chip and Putt National Finals. 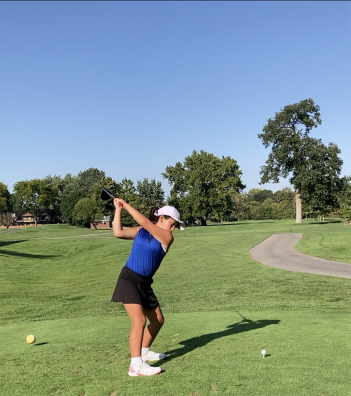 Keuling qualified with an impressive performance last month in the regional qualifier held at Oakland Hills Country Club in suburban Detroit. She took three shots in each of the three disciplines (driving, chipping and putting), and earned 135 out of a possible 225 points, with 75 points awarded for each skill. Accuracy and distance are rewarded in the driving skill while proximity is the key for chipping and putting.

“I’ve been teaching golf for 35 years, and I’ve never seen anyone with such natural ability as Maya at such a young age,” said Tony Pancake, director of golf and club operations at Crooked Stick Golf Club in Carmel.

Pancake works with Keuling a couple times a month in the golf season.

“The thing that stands out to me is how powerful she is,” Pancake said. “She hits the ball a long way. Her hand/eye coordination is great, so not only does she hit it far, but she’s consistent in her ball striking.”

That consistency paid off at Oakland Hills, where Keuling’s three drives went 210-220 yards in a stiff wind and landed in the fairway. A shot landing out-of-bounds earns zero points.

Of all the skills, Keuling likes putting best.

“It’s easy and it’s really fun,” she said. “You can hit different kinds of putts. I have a lot of confidence in my putting.”

In the qualifier, putting was the last skill to be tested, and Keuling passed with flying colors to punch her ticket to Augusta. She drained putts from 6 feet and 15 feet, and her 30-foot attempt ended just to the right of the cup.

“Watching her make the two putts and almost put the 30-foot one in was the most exciting time I’ve ever had watching her play golf,” said Eric Keuling, Maya’s father. “She’s had some big wins and made some big shots but nothing with the implication of those three shots.”

Maya Keuling’s curiosity about the game began with wondering about her parents’ golf clubs. She got a set of plastic toy clubs, and then the real things were under the Christmas tree in 2018. Lessons followed and a new passion was born. Today, she practices three or four days a week at The Bridgewater Club and Brookshire Golf Club, in Westfield and Carmel, respectively.

Keuling’s success has come against more mature competitors. In July, she made the cut at the Indiana Girls State Junior Golf Championship held at Lebanon’s Ulen Country Club. Competing against mostly high school athletes, she finished 49th out of 117 golfers, carding scores of 84, 85 and 85 for a 254 over three days on the par-71 course.

Pancake makes sure Keuling doesn’t take the sport too seriously at such a tender age.

“My No. 1 priority when I meet with her is to make sure she has fun,” Pancake said. “Unless it’s fun for her, her game won’t develop.”

That goal is certainly being met as Keuling eyes April at Augusta.

“I’m very excited and happy that I made it,” she said. “It’s probably going to be one of the most exciting weeks of golf.”