Every actor enjoys a shot as a funny villain.

Sullivan portrays the villain Sebastian Hardacre in the CHS production of “Because Their Hearts Were Pure,” an old-time melodrama, set for 7 p.m. Nov. 11 to 13 at the Studio Theater at CHS. There also is a 2 p.m. show Nov. 13. 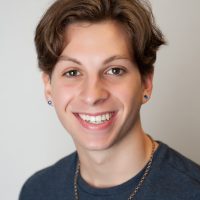 “This is the most intensive character of that nature I’ve had to play, but it’s a blast.”

Sullivan, who was selected as one of the 40 participants in this summer’s 2021 Songbook Academy, plans to study opera in college.

“I love to act, but over quarantine, I got really involved with music,” he said. “I developed my skills as a musician.”

Sullivan can sing in Italian and German.

“I’m studying opera to improve as a vocalist and to deepen my knowledge of music,” he said.

Sullivan said he has been part of 12 or 13 productions at CHS.

“We’re doing it with audience participation,” Peterson said. “They’re going to boo. We got showgirls doing a can-can. It’s everything you know of with a melodrama. It’s for all ages. There is a lot of over-acting. It’s very campy.”

Other lead performers are Michael Geary as Goodwin Dalrymple and Madelyn Wood as Melody Truelove.

For tickets, visit the CHS performing arts page at ticketracker.com.