“This is my passion,” Watson said. “I care about this and the cause we are here for. I try to get people to remember what we’re here for and not the bar or drinking. We’re here for families and veterans in need.” 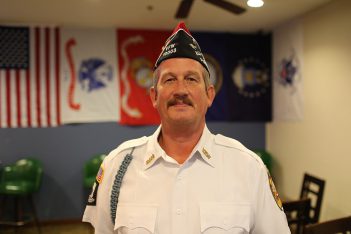 Watson, a Westfield resident who served in the U.S. Navy, is in his second year as post commander. His term ends in July 2022. He previously was senior vice commander.

“Every year you are up for (the All-American Post Award), but you have to meet all the criteria to get to that point,” Watson said.

Watson said only seven of Indiana’s 130 posts received an All-American honor this year.

Growing membership is essential, regardless of the award.

“The Veterans of Foreign Wars have to continue to grow to be successful in the causes we are fighting for,” Watson said. “You have to be 16 percent above the membership you were the year before to get All-American.”

“He’s my right-hand man, and he beats the pavement to get the membership,” Watson said.

Watson said quartermaster Tim McNally of Carmel and adjutant Steve Wyatt of Fishers are responsible to get the data entered so the national VFW headquarters can see if the post meets the award criteria.

“We had three entries that made it all the way to state, one from Voice of Democracy and two from Patriot’s Pen,” said Watson, who was district chairman for both scholarship programs.

“This post is very active,” Watson said. “I’m blessed with a great auxiliary, a great volunteer base. We do breakfasts every other Saturday. We help veterans in need.”

Watson said bartenders can give out gas cards to veterans in need.

“If someone is stuck and needs to get down to the VA, we can give them a gas card,” he said. “We help families in need at Christmas time.”

In 2020, Watson said the post conducted a drive-thru Thanksgiving dinner.

“A big group of members came in and made up Thanksgiving dinners for people to pick up curbside,” he said.

There also is an active honor guard, which participates in funerals for fallen veterans, whether they fought in foreign wars are saw combat.

“We do not believe any veteran should be buried without an honor guard,” Watson said.

Watson served in the Mediterranean while in the Navy during the tense times with Libya under dictator Muammar Gaddafi in the late 1980s. Watson, a 1985 Westfield High School graduate, left the Navy after four years, retiring as a third-class petty officer. He was an aviation mechanic.

Watson was previously a member of the Westfield VFW post, which Watson called a “paper post,” meaning it didn’t have a building or many members. The Westfield post merged with Carmel in 2017.

“Here we have an opportunity to build so much better programs and do good for the community,” said Watson, who owns Esler’s Auto Repair Shop in Westfield. “I’m in awe all the time when we have a breakfast and we have so many volunteers show up.”

Post 10003 house committee chairman Darin Bibeau said he has seen other VFWs across the nation where his friends are members, and Carmel’s post stands out.

“I’m extremely impressed under (Post Commander Joel Watson’s) leadership and what he is able to accomplish, especially in a town where you don’t hear a lot about the veterans,” Bibeau said. “But once you are here, you realize there are tons of veterans who do need help. With his leadership, it spreads like wildfire among all the volunteers.”

Watson said Bibeau, who served in the Coast Guard from 1994 to 2003, has been instrumental in setting the tone in the house canteen.

“We’re not here to drink, carouse or gamble,” Watson said. “We’re here to actually serve the community and do good for the veterans.”

Watson said he recently received information from the VFW national headquarters that stated the suicide rate of veterans in Hamilton County was the highest in the state in the past month.

“We’re trying to get the word out that help is out there,” Watson said. “That’s why we’re here.”

Bibeau, a Carmel resident, said his position includes overseeing fundraising, such as the breakfasts held every other Saturday.

“Once I joined, I got involved quickly because I like the cause,” he said. “The more we can get the community involved to help veterans, the better everyone is.”