“I am legitimately living my 8-year-old dream of being Gabriella,” Schlueter said. “That honestly has been the coolest part of this whole thing. I have been able to recreate and accomplish one of my childhood dreams, which is an experience I never thought I would get.” 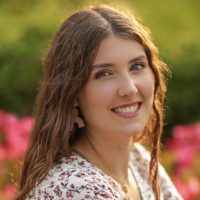 “With playing Gabriella, I have found there are a lot of similarities between the character and myself,” Schlueter said. “Gabriella is a sweet girl who is known as the nerdy girl, but who wants to break the stigma that is held over her head. This whole production actually is a phenomenal representation of the many stereotypes that high schools and teenagers get these days. It simulates the fact that while teenagers want to break out of their shell and be their true selves, they are terrified of people’s perception and of breaking the status quo their environment has created. With that being said, there are some challenges with this role. Gabriella is the new girl who ends up helping to bring a lot of change to her high school, but with some barriers and obstacles along the way. The challenge with this is that it is real life for high schoolers.

“Trying to replicate the actual high school experience on stage has been more challenging than I thought, but all the more worth it. It has helped me understand myself more and the many ways that people experience high school.” 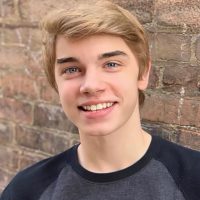 “It’s been cool being able to dive into the character of Troy Bolton and figure out his internal struggles because Troy actually has a super interesting and emotional journey,” Morrison said. “This challenged me because usually when people think of ‘High School Musical,’ they think of this lighthearted Disney movie when there are actually a lot of dark underlying messages going on with Troy’s friends and family that we wanted to bring some more attention to.

“’High School Musical’ was actually one of the reasons I decided to do theater when I was younger. I was obsessed with the movie and wanted to be just like the people on my TV screen, and now here I am actually in the musical.”

Director John Neubauer, the NHS choral director, said the biggest challenge is living up to the memory of a very well-known viewed movie.

“The story is not completely the same and the characters have more development than the movie,” Neubauer said. “The music is not identical. I like the musical score more than the movie.”

The musical is the school’s first since “Beauty and the Beast” in November 2019.

“We were set to produce ‘Little Shop of Horrors’ last year but the COVID situation did not cooperate,” Neubauer said. “The musical production team decided we needed a ‘feel good’ piece at this time to bring people together rather than a story about a plant that destroys Earth.

“‘Little Shop of Horrors’ may come back in the future. It’s a great show, too.”

Neubauer said it’s important the students have a musical.

“For some students, hitting the stage for a performance that they have worked very hard on is a significant motivator,” Neubauer said. “The process is time consuming but the payoff in feeling accomplished is irreplaceable.”

Morrison is just glad to be performing.

“I have been performing ever since I can remember, so I am so thankful to be able to do a musical at NHS again this year,” he said. “I grew up doing musical theater at the Booth Tarkington Civic Theatre and I have also performed at The Belfry Theatre, Anderson University and the historical Hilbert Circle Theatre with the Indianapolis Symphony Orchestra, which was a super-cool experience.”