It was always going to be tough for Chuck Koeppen to leave the cross country and track and field head coaching ranks, but he decided that now is the time. 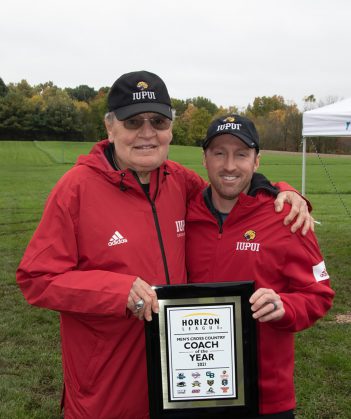 From left, Chuck Koeppen, who recently retired as head coach of the IUPUI cross country and track team, pauses with Justin Roeder, a former assistant coach who took over the role as interim head coach. (Photo courtesy of IUPUI)

Koeppen’s last day as head coach was coaching IUPUI in the Great Lakes Regional Nov. 12 in Evansville. He handed the reins to assistant Justin Roeder during the track and field season. Koeppen will be the assistant and Roeder will be the interim coach.

“He’s done a marvelous job,” Koeppen said. “I didn’t want to stand in his way, and he deserves a shot at being the head coach.”

Koeppen said he hopes IUPUI will hire Roeder, a 2004 individual state champion from Hamilton Southeastern High School, as the full-time coach after the 2022 track season.

“I told my bosses I’m only stepping down because this guy should be taking over,” Koeppen said. “He’s one of the best young coaches in the country.”

Koeppen said he feels fortunate to have coached at CHS during its “golden era” in the 1970s and 1980s, when the teams first began winning titles.

“I was coaching alongside guys like Dick Dullaghan (football) and Eric Clark (basketball) and Dale Graham was the principal,” Koeppen said. “Bill Shepherd Sr. was the former basketball coach and athletic director. They were great to me when I was there. It was back when Carmel would celebrate their state championships. By the time I left Carmel, they were pretty much taken for granted. If you didn’t win, it was almost a disappointment.”

Koeppen said the final teams he coached at CHS in 2008 were determined to win a state title.

“We knew the girls had won, but we weren’t sure about the boys. It was finally announced the boys had won, and they just went crazy,” Koeppen said. “It was nice ending on a good note, and winning those championships meant the world to me.”

“Being able to run my first 2 1/2 years of high school under Coach Koeppen really drew me into the sport and kickstarted my love for it,” Ohman said. “Seeing firsthand how coach could motivate and bring the best out of his runners inspired me early on to be the best I could. His passion for the sport is what led me to continue my running career post high school and ultimately to get into coaching as well. Coach’s impact can be seen around the state in coaching staffs at different levels, which is a testament to the impact he had on those runners on his teams.”