FishersTheatre Director Anna Nickell was never an ardent ABBA fan. But that changed when she immersed herself in the Fishers High School fall musical, which features many of the Swedish supergroup’s biggest hits.

“I can’t say that I was a major ABBA fan before directing the show, but I have become one,” Nickell said of FHS’s presentation of “Mamma Mia!”, a story told through the narrative of ABBA songs from the 1970s and early 1980s. 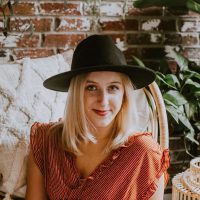 “This is a show I have been interested in directing for several years, and I think it is a show perfect for our current time,” Nickell said. “It allows the audience an escape from reality through familiar and fun music, costumes and sets.

“From a practical standpoint, our budget is recovering after losing ticket revenue due to COVID, so we wanted to select a show that we felt audiences would be excited to come see.”

Kylee Booher, a senior who portrays Tanya, is excited to be in the show, which tells the story of Sophie, who lives on a small Greek island and “dreams of the perfect wedding,” with her father giving her father “giving her away.” But she doesn’t know who her father is, and her mother, a former lead singer for a 1970s pop group, won’t talk about her past.

“I like the theme,” Booher said. “Sometimes you have to take a leap of faith to achieve your dreams, and family isn’t always about the people that are relatives. Family can be your best friends that have supported you.”

Patrick Britting, a junior who plays Bill, appreciates the story for many of the same reasons.

“Something I really like about ‘Mama Mia!’ is the message it sends about identity,” he said. “The main character, Sophie, believes that finding her dad will allow her to know who she is, but by the end of the musical, she realizes her identity isn’t determined by her family.

“It shows that who you are is not dictated by the people around you, and you have to look within to truly find yourself.”

Because of the popularity of the movie and the fact ABBA’s songs, which include the hits “Dancing Queen,” “SOS,” “Waterloo,” “Take a Chance on Me” and the title song remain popular today, Booher said the main challenge of staging the musical is delivering a flawless performance.

“There are many (challenges),” Booher said. “But the most important one is that ‘Mamma Mia!’ is iconic, so we need to live up to expectations.”

“One of the biggest challenges with ‘Mamma Mia!’ is the amount of energy that the show requires,” Britting said. “It takes a lot of energy, both mentally and physically, to put on any musical, but ‘Mamma Mia!’ is unique in that many musical numbers are in the show solely for the purpose of the cast and the audience to have fun.”

Tickets are $10 for students and $12 for adults. For more, visit theatrefishers.com.