You are at:Home»Current in Fishers»Fishers Community»Athlete of the Week: Carsen Plew makes best of senior year for Fishers volleyball team

This was senior outside hitter Carsen Plew’s first year starting for the Fishers High School volleyball team, but she made quite an impact.

“Carsen is a mentally tough player who fights hard for every point,” Tigers coach Steven Peek said. “In the back row, she is scrappy and moves well, and she has numerous shots and skills in the front row that make her difficult to prepare for and defend against. Fishers has been blessed by Carsen’s poise, leadership and determination.” 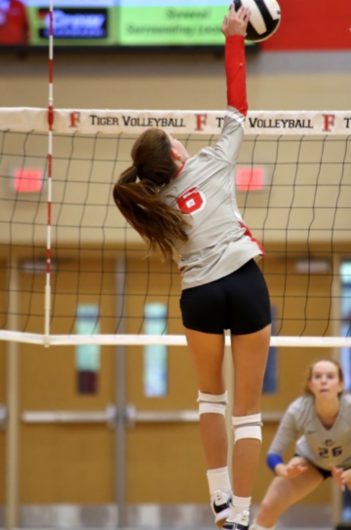 Fishers senior outside hitter Carsen Plew was second on the team in kills. (Photo courtesy of Kirk Green)

The 5-foot-7 Plew was second on the team with 210 kills for the Tigers, who finished 22-6. Fishers lost a Class 4A regional championship match to McCutcheon Oct. 23.

In the two regional matches against Fort Wayne Carroll and McCutcheon, Plew delivered 18 kills, 17 digs and five blocks. She said she improved throughout the season.

“I feel like I made the most improvement in September this season,” Plew said. “I feel that my consistency as both a passer and hitter improved.”

“There was a large group of talent ahead of (Plew) and the others from this season,” Peek said. “We actually graduated five of our seven starters, which caused people to overlook us this season. Carsen was one of the players to immediately step up this summer to set high expectations for all, and she was great at setting an example to live up to as well.”

Plew said they might have taken some teams by surprise.

“I think other people didn’t expect us to come out as strong this season after graduating so many key players, but I feel we did a great job proving them wrong,” Plew said. “I think all of us having the same mindset of competing our hardest and continuing to get better each day, but also making sure we had fun while doing it, helped us succeed this season.”

Plew had only 13 kills in limited action as a junior. She also dressed varsity as a sophomore.

“But I only played a handful of points each of those seasons,” said Plew, who played club volleyball for Munciana Indy.

“I decided to focus on volleyball in eighth grade,” Plew said.

Plew said volleyball has always been her favorite sport to play.

“This made it easy to pick which sport I wanted to focus on,” she said. “I liked the constant speed of the game and how something interesting is always happening.”

Plew plans to attend Indiana University and major in psychology and minor in biology. She would like to play on an intramural volleyball team at IU.