You are at:Home»Current in Fishers»Fishers Community»Community raises more than $130K for domestic violence survivors

More Than a Phone, a Fishers-based program that donates smartphones and data services to survivors of domestic violence, raised more than $130,000 at an Oct. 31 tailgate fundraiser ahead of the Indianapolis Colts game against the Tennessee Titans at Lucas Oil Stadium. 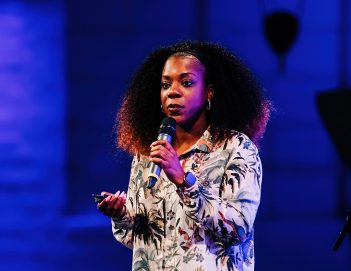 “It’s such a fun morning of learning about the program, but more than that, celebrating all the things that we are doing,” said Courtney Kibble, director of the More Than a Phone program.

Closing out Domestic Violence Awareness month in October, all proceeds from the event went directly to helping survivors of domestic violence get set up with smartphones and data service.

“This event helps fulfill critical communication needs for survivors, and we are so thankful for the support from our guests and community partners,” said Julie Moorehead, executive director of More Than a Phone. “While we are so excited to enjoy the day with our guests, we want them to know their attendance raises awareness for and supports a very important cause.”

More Than a Phone started in central Indiana in 2017 and has doubled in size in four years. The program partners with local domestic violence shelters in 17 states and Washington, D.C.

To get connected with shelters, More Than a Phone partners with domestic violence coalitions in each state to get their service directly to those in need. The program has been vetted by the National Network to End Domestic Violence.

The phones and cell service are provided through TCC, a Verizon-authorized retailer.