You are at:Home»Current in Carmel»Carmel Community»Athlete of the Week: Carmel linebacker Will Heldt was huge presence on defense

A significant growth spurt turned Carmel High School junior outside linebacker Will Heldt into a major force this season.

“It was a long offseason of growth and weight gain,” Heldt said. 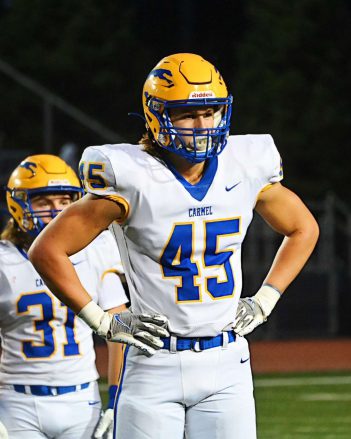 Junior Will Heldt was a top tackler for the Carmel High School football team. (Photo by Greta Gaynor)

In his first varsity season, Heldt led the Greyhounds in total tackles with 108, including 61 solos and 11 tackles for loss. Heldt, who was named all-Metropolitan Interscholastic Conference, also had four sacks, two forced fumbles, two fumble recoveries and one interception.

“He played so well all season but especially the last three weeks,” CHS coach John Hebert said. “He is a very tough guy that has a passion for the game. He studies the opponent very thoroughly. His technique at outside linebacker was very good.”

Heldt played inside linebacker for the junior varsity team but switched to outside this year.

“I think I prefer to play outside because I think I like playing in space a little more,” Heldt said. “I think as I gained experience, I definitely got better as the year went on and learned what I could throughout the year.”

Heldt said his tackling has always been strong.

“I think I got better at block shedding and overall knowledge of what to do and when,” he said.

“We were giving up a good amount of points,” Heldt said. “We started tightening up. We were improving. We have a lot of guys coming back next year. We lost some key players and some great players.”

“I don’t think I’ve been a part of a team I was so emotionally invested in,” Heldt said. “Spending time with the guys was the best part of the season.”

The Greyhounds, who were ranked No. 4 in the final Class 6A rankings, finished 9-2, losing to No. 5 Brownsburg in a 6A sectional championship game. Their only other loss was to 6A No. 1 Center Grove.

Heldt suffered a boxer’s fracture in his hand during the game against Lawrence Central in the regular-season finale.

“I had a splint on it, and I just wrapped it up with tape,” he said. “I just played through it.”

Heldt said he is in the college recruiting process now.

“I want to get bigger, stronger and faster,” he said. “I just want to work on technique and everything that involves my position.”