You are at:Home»Night & Day»Artist Profile»Carmel father/daughter duo get opportunity to act together in ‘Elf The Musical’

Jack Tanselle is picking a special reason for returning to the stage to act for the first time in 23 years. The last time he performed was in a graduate school follies show in 1998 at Northwestern University.

“My daughter has been in a number of shows at Civic Theatre over the years,” the Carmel resident said.

As a senior at Park Tudor High School, Mary Kate Tanselle was auditioning for her first main stage show as an adult. 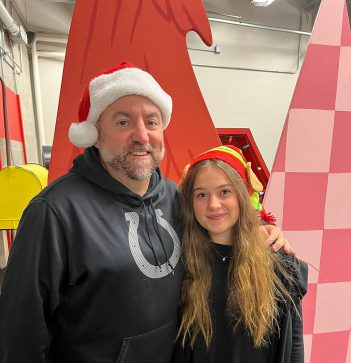 Jack Tanselle and his daughter Mary Kate appear together in “Elf The Musical.” (Photo courtesy of Civic Theatre)

“She and others encouraged me to go through a show with her and go through the process of preparing for a show with her, realizing there may not be another moment when that can actually happen,” Jack said. “I was pretty excited when I got the role.”

Jack and Mary Kate will appear together in Civic Theatre’s production of “Elf The Musical” from Dec. 3 to 24 at The Tarkington at the Center for the Performing Arts in Carmel.

“Prior to her getting her driver’s license, the most involved we were was chauffeuring her to rehearsals,” Jack said. “We were living vicariously through her on what the whole process was like. But it’s been a whole other experience to be here every night with rehearsals. One funny thing is, we are not in a scene together until the finale by the role I play and all the different roles she plays. When I’m not in a scene, I’m able to watch her and vice versa.

“She’s had an awesome experience with the staff at Civic over the last eight to 10 years, and she has turned around and been quite a helpful coach to me.”

Jack said he had to learn the process of memorizing lines and getting comfortable reacting.

Mary Kate said she has watched videos of her father performing at Lebanon High School.

“It’s been fun to see him perform again. It’s been especially fun to see him do it at Civic, a place I’ve grown up and done so many performances here,” she said. “He’s always been in the audience, and it’s fun to have him on the stage at this time. We had a lot of friends and family pushing him to do it. I helped him prep for the audition and gave him the best tricks and tips I know. That was fun, too.”

Mary Kate said the dancing for her role is intense.

Bays, a former Westfield resident who moved to Cincinnati, is returning in the role he played in Civic’s 2019 production of “Elf The Musical.”

“I never had any doubt about that,” Neal said of wanting to reprise the role. “I sing five or six songs by myself or with someone. We get to be part of the action, which is really fun. I’ve been doing (theater) as a volunteer and professional for more than 20 years, and I would put this in the top three shows (I’ve) ever done.

“The audiences love it so much. There is something special about bringing the holiday to someone.”

Noblesville resident Emily Bohannon returns in the role of Jovie.

“The way you play a character has so much to do with the people who share a stage with you,” she said. “I’m reacting to their energy. There are changes I’ve made, and changes Matt has made. In 2019, I just wanted to do a good job that I was so tense. This time, I’m more relaxed and having more fun.”