It all started fewer than 200 miles from Carmel when a reporter from the Chicago Tribune interviewed an unknown singer at the storied nightclub, Mr. Kelly’s. The singer was Bette Midler, and the reporter was Bruce Vilanch.

Vilanch is bringing his popular one-man show, “Hollywood Blonde Tells All,” to Feinstein’s at Hotel Carmichael in Carmel at 7:30 p.m. Dec. 11. 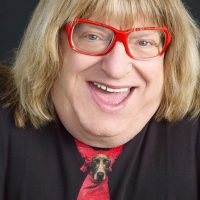 The show features behind-the-camera and backstage scenes on everything from “Star Wars” to “The Muppets” and every celebrity that has collaborated with him. His personal diaries are bursting with revealing and comedic experiences in the company of show business’ elite.

Widely known for his unbridled and sometimes outrageous humor, Vilanch has won six Emmy Awards for comedy writing. He was head writer for the Academy Awards for eight years and was the frequent center square on “Hollywood Squares,” where he established his trademark T-shirts emblazoned with witty and risqué topical observations.

Vilach played Edna Turnblad in Broadway’s “Hairspray,” the off-Broadway hit; was the subject of “Bruce Vilanch: Almost Famous,” a feature-length documentary; and was an iconoclastic standup comedian in “Get Bruce.”

Immediately following their eventful meeting at Mr. Kelly’s, Vilanch started writing for Bette Midler. She once said, “For years, I never said a word that Bruce didn’t charge me for.” She is not alone. Vilanch is a much in-demand comedy writer for Hollywood’s elite, including Whoopi Goldberg, Cher, Diana Ross, Lily Tomlin, Billy Crystal, Rosie O’Donnell, Kelsey Grammer and awards shows, including Emmy, Grammy, Tony, and People’s Choice Awards.