Fishers filmmaker Dylan Query would love to see Indiana become a destination that attracts other filmmakers.

“One thing I was alarmed with, and I understand the reasoning behind it, at Ball State, we were encouraged to leave the state of Indiana in order to pursue what we want,” said Query, a 2019 Ball State University graduate. “There is a lot of industry in California, New York, Chicago, Seattle and Atlanta. Even though we were encouraged to leave, I always questioned, ‘Why not here in Indiana?’ Indiana has a lot of potential but also has a lot of growing to do to build a successful film industry within the state. A lot of people think that tax incentives (for companies) are the way to go. Unfortunately, I think it’s only part of the problem.

“Tax incentives will help bring productions to Indiana, but will they help production companies to stay in Indiana?”

A tax incentive bill has to be passed by the Indiana General Assembly.

Query said when a solid foundation is built in Indiana, it will create more opportunities to bring more film productions to the state.

“People need to be doing what we’re doing. They need to be making films,” he said.

Query is in the midst of directing his first full-length film, “Cold Cross.” The movie was first a 16-minute short film, called “Cold Creek,” that won Best Short at Pop Con’s 2020 International Film Festival. The Western’s plot centers on outlaw William McCarthy, who seeks revenge on the gang members who sold out his parents to Sheriff Felix Danberry, who murdered them.

“We were about halfway through production of our feature-length film before things got so bad (with COVID-19) that we decided we were going to postpone production,” said Query, who has lived in Fishers for two years. “Our film takes places during the winter months. Now, we are back in production. We’ll be continuing production the rest of winter until spring of 2022.”

Query said the goal is to have the film released in the late summer of 2022. The film will be between 2 and 2 1/2 hours long.

Query said $10,000 has already been raised to pay the actors.

“That was a high priority for us, paying our talent,” Query said. “Especially in Indiana, there are a lot of situations where local artists feel like they aren’t being invested in. We definitely understand that and wanted to do our part to help pay local talent a fair amount of money for their time.”

Query said his company has partnered with a fiscal sponsor, From the Heart Productions, that has helped with the process.

“Having that fiscal sponsor converted our film into a nonprofit,” Query said. “I think that kind of embodies what we’re about. We’re not making this film with the idea we want to make a lot of money from it. Any sort of money we make from this film is going to be delivered to our talent as a bonus, or it’s going to be funneled into the next big project, which is the most likely scenario.”

Query said his company was seeking actors and crew members from Indiana, Ohio and Kentucky.

“It was important to us to hire locally,” he said.

The lead actor is Jacob Stieneker, who attended Pike Central High School in Petersburg with Query. Stieneker and Query co-wrote the script. Query graduated from Pike Central in 2015, one year before Stieneker.

“Stieneker also is a member of a band (When in Roam), and that band is working on creating an original soundtrack for the film,” Query said.

Bobby Christman, who lives on the west side of Indianapolis, is starring as Sheriff Danberry.

Christman was tipped about the project from Carmel High School graduate Ryan McClain, who was working on the film as a sound man.

“He knew I was an actor and said, ‘I definitely want to work with you one day,’” Christman said. “He told me about Dylan and the project. I didn’t even have to audition for it. We did ‘Cold Creek,’ and it was fantastic for such a low-budget film. It was really well done. I knew I wanted to work with those guys as much as possible. They’re young and hungry. I’m old and hungry, so it’s a good team. We have a fantastic cast. We have high hopes for it.”

Not surprisingly, Christman supported the move to make it a full-length film.

Like Query, Christman said getting tax breaks would be key to luring filmmakers.

“That’s why nothing’s getting made here,” Christman said. “They keep talking about (legislation) but it never happens.” 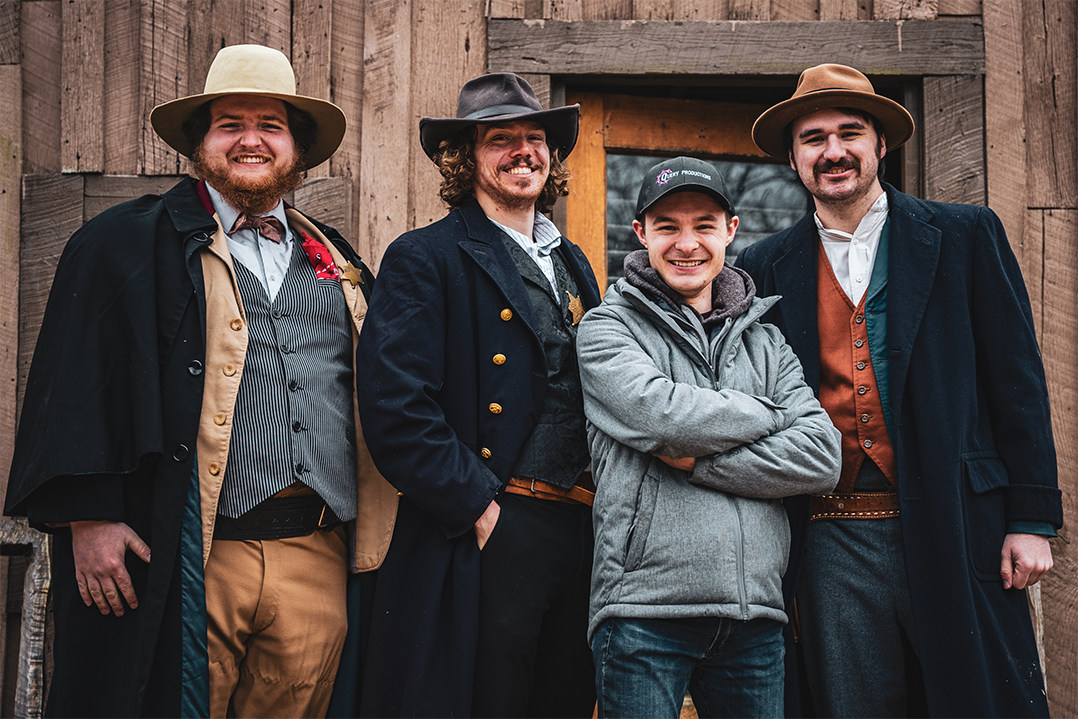 “She helped get the fiscal sponsor and is applying for grants and working with promoting the film,” Query said.

Query is still seeking financial sponsors and donors in an attempt to raise $10,000 more for production, actor, and wardrobe costs.

“With a donation of $9 or more, we are presenting the donor with a digital ticket to the film whenever it is finished,” Query said.

Query had been filming events and weddings as a side job to support his filmmaking.

“Recently, I’ve switched the focus to being a filmmaker,” Query said. “That’s always been a passion of mine. I started doing weddings and events to fund equipment I need, (such as) the camera, the lenses, the grip that I needed. Now that I have those things paid for, I can switch my true focus to making films and telling stories.”

Query has extended invitations to high schools to have interested filmmakers join the crew on set to see the process.

For the fundraising information, visit queryproductions.wedid.it/. To view the trailer, visit vimeo.com/510554512.