Five Hamilton County dispatchers recently blended some of their most memorable stories from 911 calls to cook up a new family recipe book, “From Capes to Aprons.”

“Once I came up with the idea, I contacted these ladies,” Haston said. “I went by seniority. I wanted to start with the older ones, the older stories.”

Many of the stories are funny, and several are heartbreaking. Each is accompanied with a family recipe from one of the women. Each woman shared up to 10 stories and recipes.

“When we were thinking about it, we decided on the theme of heroes in everyday lives,” Haston said. “Every hero has an everyday life they live, so the cape signifies a hero or first responder – a dispatcher, police officer, firefighter, paramedic, nurse, military – but they take that cape off when they get home, and they still have to live a normal life. They still have to cook dinner.

Recipes span from desserts to main courses and include items like zucchini bread, cake balls and chicken and rice casserole.

Haston retired as a dispatcher during the COVID-19 pandemic and began cooking at home. She started photographing her food creations.

“I would think of the stories like, ‘I ate this when I came home from that day,’” Haston said.

Robison, an Arcadia resident and the only writer in the group who still works as a Hamilton County dispatcher, said most of the stories she shared were funny. The recipes she contributed were her husband’s.

“I am not the cook, but I had some stories, so that’s why (Haston) asked me,” Robison said.

Robison shared one story in the book where a woman was housesitting, and when she went upstairs, she saw a man standing there.

“So, she runs downstairs and calls 911,” Robison said. “We get there, and we check the lower level, then we go upstairs, and it is a cardboard cutout of ‘The Most Interesting Man in the World.’”

No names, addresses or physical identifiers are included in the stories. The women also didn’t include stories from popular, recent or disturbing cases.

Jeffries, an Atlanta resident who worked as a communications supervisor for 32 years before retiring at work in the Hamilton County Jail, said one of her favorite stories involved a snowstorm and a pileup on Interstate 69 in 2009.

“The forecast said we were supposed to have a light snowfall in the morning, but we got hit bad,” Jeffries said. “All these semis wrecked, and there was a chain reaction of cars and semis. It was just utter chaos in our center. We had cars under semis and people calling us from said cars. It was pretty horrendous, but it all worked out really well. We had very few fatalities considering the amount of cars.”

More than 20 cars were involved in the accident. As the dispatchers responded to the countless 911 calls, they used a whiteboard to write down some of the information.

“We use humor to deal with things,” Haston said. “At one point, someone got up to write something on the board and wrote, ‘Whatever, Chuck,’ because (WTHR weathercaster) Chuck Lofton predicted a light dusting of snow. (The wreck) made national news.”

Becky Feltz, a Noblesville resident and retired dispatcher who now works as an accounts payable administrator for the Carmel Police Dept., shared a heartbreaking story. In 2005, Feltz took a 911 call when a canoe capsized in the White River.

“A couple people found a child in the water,” Feltz said. “They pulled him out and called 911, and I immediately wanted to start CPR, but the guy said, ‘I don’t think that’ll do anything.’ I actually convinced him to do it, and he did. The other two people there helped each other doing CPR the whole time until police got on scene to take over. The child didn’t make it and the father also didn’t make it. They found him later.”

Feltz received the Dispatcher of the Year award from Riverview Health for the way she responded to the incident.

“I didn’t know why. I didn’t save the child. The child died, the dad died,” Feltz said. “They’re like, ‘But you stuck to your guns, you didn’t give up. You tried everything you could. You were persistent.’”

Feltz kept the award stored in a box for a long time, but now she displays it on her desk.

“It’s sad. A child lost his life, and a dad lost his life. You think about them sometimes,” Feltz said. “But you did everything you could. I know that.”

The book published last month. It sells for $24.95 and can be purchased on Amazon and barnesandnoble.com. 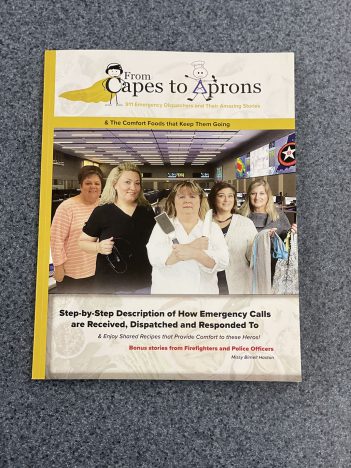 Missy Haston is already talking to other dispatchers to write a sequel to the recipe book but with different points of view.

“We would like to throw in some newer people with experiences that are fresher in their minds, but I wanted to start with us seasoned gals,” Haston said.

“From Capes to Aprons” features a yellow cape on the cover because that is the color for dispatchers. With future books, Haston plans to change the cape color to match the corresponding color of the profession.