You are at:Home»Current in Carmel»Carmel Community»Carmel Racquet Club to dedicate court to Ram family

When the Carmel Racquet Club approached tennis pro Rajeev Ram about naming a court after him, he was honored.

He had one request. Ram wanted the court named the Ram Family Championship Court because of the support of his parents, Raghav and Sushma Ram. Raqhav died in 2019 at age 68.

“I wouldn’t have done anything without my mom and dad,” said Ram, who is an only child. “We spent a lot of time at that club as a family.” 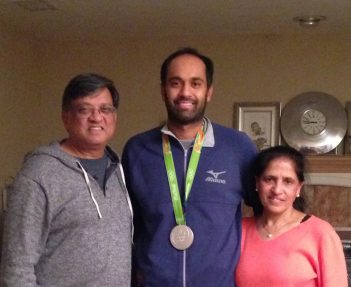 Ram will hit with Dr. Dave Fisher, a retired orthopedic surgeon, at 5:30 p.m. Fisher won the opportunity in a Hamilton County Community Tennis Association fundraiser. From 6 to 6:30 p.m., there will be a court dedication, followed by Ram signing autographs and posing for photos if time allows.

The Ram family joined the club after his family moved to Carmel. Ram took lessons from pro Mark Woldmoe and won a national junior title at age 12.

“My dad took tennis up more regularly because I loved it,” Ram said. “We did it together. It was much more of a family interest.”

Ram said his mother played sparingly but supported his love of the game.

“When a kid is that interested in it, it becomes a family affair very quickly,” Ram said. “I was there most every day, and someone had to take me, and that was usually her.”

Ram said while he was on the ATP Tour, his father began playing tennis more.

“It was cool for me to see,” Ram said. “He was at the club pretty regularly playing. For so long the tennis was around my schedule. It was a lot of fun for me to see something we did together, but he was enjoying himself.”

Ram ended the season ranked No. 4 individually in doubles.

In addition, Ram and Venus Williams earned the silver medal for mixed doubles at the 2016 Olympics in Rio. Ram has two ATP Tour singles titles, both on grass at Newport, R.I. He gave up singles to concentrate on doubles during the 2017 season.

With the four Grand Slam doubles titles, many observers consider Ram to be one of the best tennis players to come from Indiana, if not the best.

“I’m happy to be in that discussion,” said Ram, who captured the state high school singles champion as a Carmel High School sophomore in 1999. “I am happy to represent where I’m from and where I grew up. If someone wants to say that, I appreciate it. I’m happy to be in the mix.”