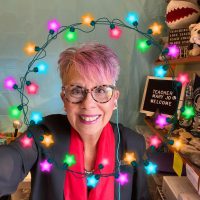 Indianapolis Symphonic Choir member Mary Jo Wright missed singing with her friends during the height of the COVID-19 pandemic.

“We are thrilled to be back live this year,” Wright said. “It was really hard not to be together last year because we’re like family.”

“Festival of Carols is one of the biggest performances we put on solely by the Symphonic Choir,” Wright said. “It’s such a treat to sing at the Palladium.”

Wright said there are always two songs the choir does each year. One is “The Dream Isaiah Saw.”

“That was written after 9/11. It’s a beautiful song,” Wright said. “It’s written to focus on what is really important. “

The music was written by Glenn Rudolph and the lyrics are by Thomas Troeger.

“He began it in July (2001) and completed it Sept 30 after knowing what happened on Sept. 11,” Wright said. “It’s a beautiful piece and dedicated to the memory of those who perished on 9/11.”

“We have changed other pieces every year,” she said. “We have some really great pieces this year. I know when people hear ‘Festival of Carols,’ they think we’re just going to get up and sing Christmas carols. (While) they are that, they are some of the most beautiful choral (songs) that have been written at this time.”

Wright said every year there is a competition for new artists who are not well published. ISC Artistic Director Eric Stark and his staff picks a song to perform.

“We give it what is considered its worldwide premiere,” Wright said. “The piece this year is called ‘Gather around the Holy Manger.’ It speaks how powerful that it is being gathered around the manger and welcoming God’s son. There is always a funny (song) that is written by accomplished keyboardist. It shows a lighter side of our choir.”

Wright is a retired elementary school teacher. She taught at Sycamore School in Indianapolis, Park Tudor and in Washington Township in Indianapolis. She retired seven years ago.

“I’ve always sung, and my husband said you really should audition for the Symphonic Choir,” she said. “I was shocked I made it. I had this voice I didn’t know what to do with. I’ve made it and learned so much. We have doctors, engineers and teachers, all kinds of career paths, in the choir. We audition every year and it’s all volunteer.

“I’ve learned more about how to read music from Dr. Stark. It’s such a blessing to be a part of it.”