You are at:Home»Current in Carmel»Carmel Community»Carmel to install 4 classic car-inspired sculptures in 96th Street roundabouts

The City of Carmel plans to install four sculptures in roundabouts on 96th Street that pay homage to automobiles designed and built in Indiana in the first half of the 20th century.

The Carmel Redevelopment Commission on Dec. 15 approved a contract with artist Arlon Bayliss to provide the sculptures in roundabouts at Priority Way, Delegates Row, Gray Road and Hazel Dell Parkway. The city will spend $2.5 million for the sculptures, with funds coming from TIF bonds approved by the city council.

“After considering lots of other concepts for four roundabouts on 96th Street, it was decided that classic cars of Indiana was a really solid concept,” Bayliss told the CRC. “It will allow us to make work that’s going to be relevant, not just now but 50 years from now, the kind of work that people would appreciate.”

96th Street borders Indianapolis across Carmel’s southern border. Many of the city’s car dealerships are along the corridor east of Keystone Parkway, where the sculptures will be placed, which provided inspiration for the theme. CRC Director Henry Mestetsky told commissioners that Carmel Mayor Jim Brainard wants to ensure the dealerships remain in Carmel rather than move north, as many Indianapolis-based dealerships did with new development.

“We want to lock (the dealerships) in place. We want this to be the premiere place to buy a vehicle in the state,” Mestetsky said. “The mayor’s thinking always has an economic development component behind it, and that’s a huge one for this location.”

Bayliss has created three other sculptures in Carmel roundabouts: Beacon Bloom at 96th Street and Westfield Road; Grace, Love and Joy at N. Pennsylvania and Old Meridian streets; and Homage to Hoagy at 3rd Ave. SW and City Center Drive.

The following provides details about each sculpture. 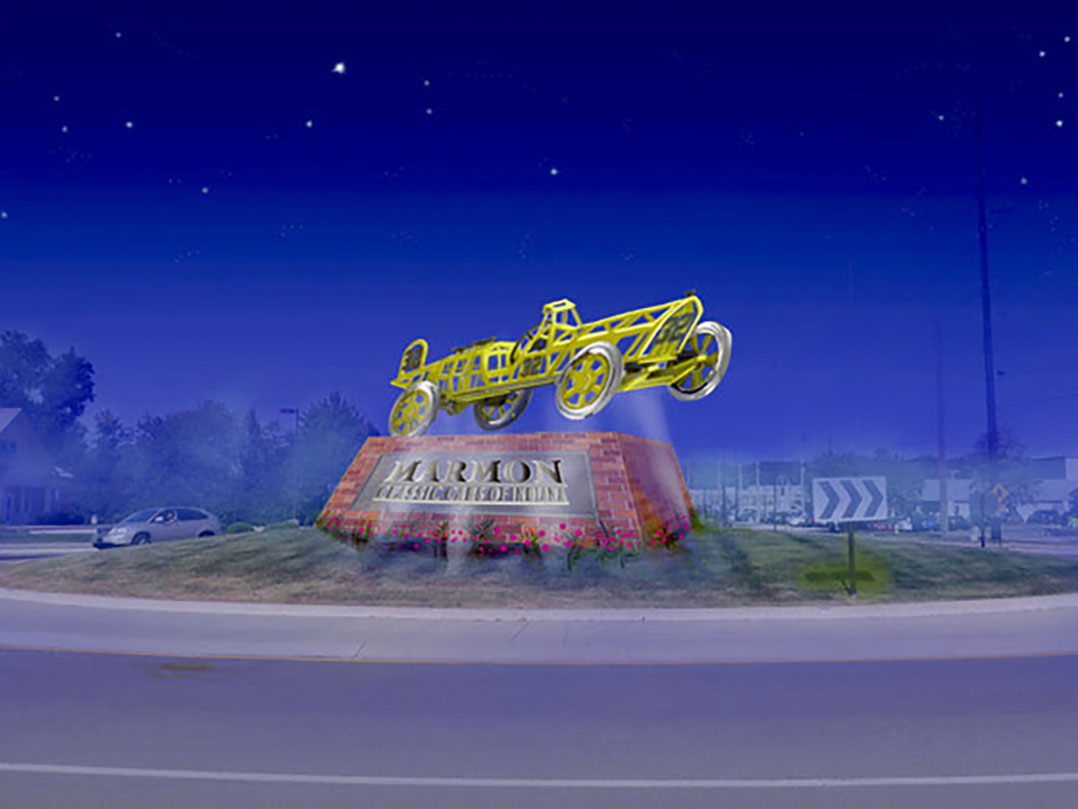 A sculpture inspired by Marmon cars is set for 96th Street and Priority Way. (Image courtesy of the City of Carmel)

The sculpture set for 96th Street and Priority Way is inspired by Marmon, which built the Marmon Wasp, the car that won the first running of the Indianapolis 500 in 1911. Bayliss’ sculpture shows a black and yellow car – the same colors as the first Indy 500 winner – slanting forward with its front wheels rising off the ground to symbolize speed. The base will be finished in Indiana limestone and brick, representing the Brickyard track.

The sculpture and base will be 25 feet long and more than 12 feet high and will be illuminated at night. 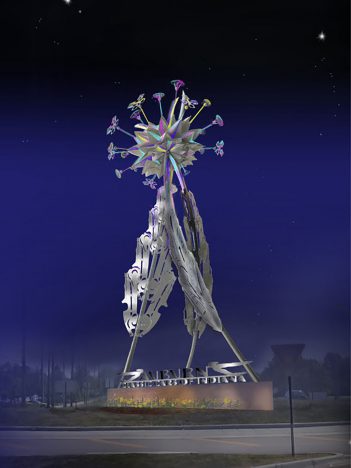 A sculpture inspired by Auburn, Cord and Duesenberg cars is set for 96th Street and Delegates Way. (Image courtesy of the City of Carmel) 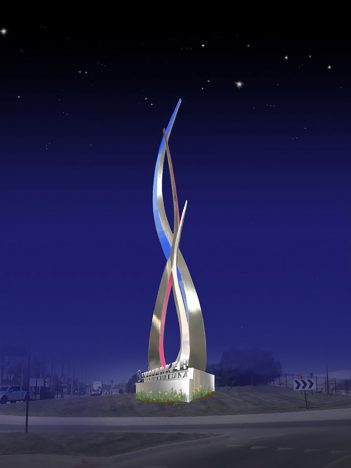 A sculpture inspired by Studebaker cars is set for 96th Street and Hazel Dell Parkway. (Image courtesy of the City of Carmel)

Standing 32 feet tall, the sculpture planned for 96th Street and Delegates Way will feature silhouettes of well-known Auburn, Cord and Duesenberg designs on curved stems tapering toward a star of achievement bursting with gears, pistons and wheels. It will be illuminated at night by LED spotlights, with the top including multi-colored sparkling dichroic lighting similar to that used in Beacon Bloom.

The tallest of the four sculptures will honor Studebaker and be placed at 96th Street and Hazel Dell Parkway. Three forms ranging from 18 to 36 feet tall taper to the sky inspired by the Studebaker Lazy S car badge and logo. 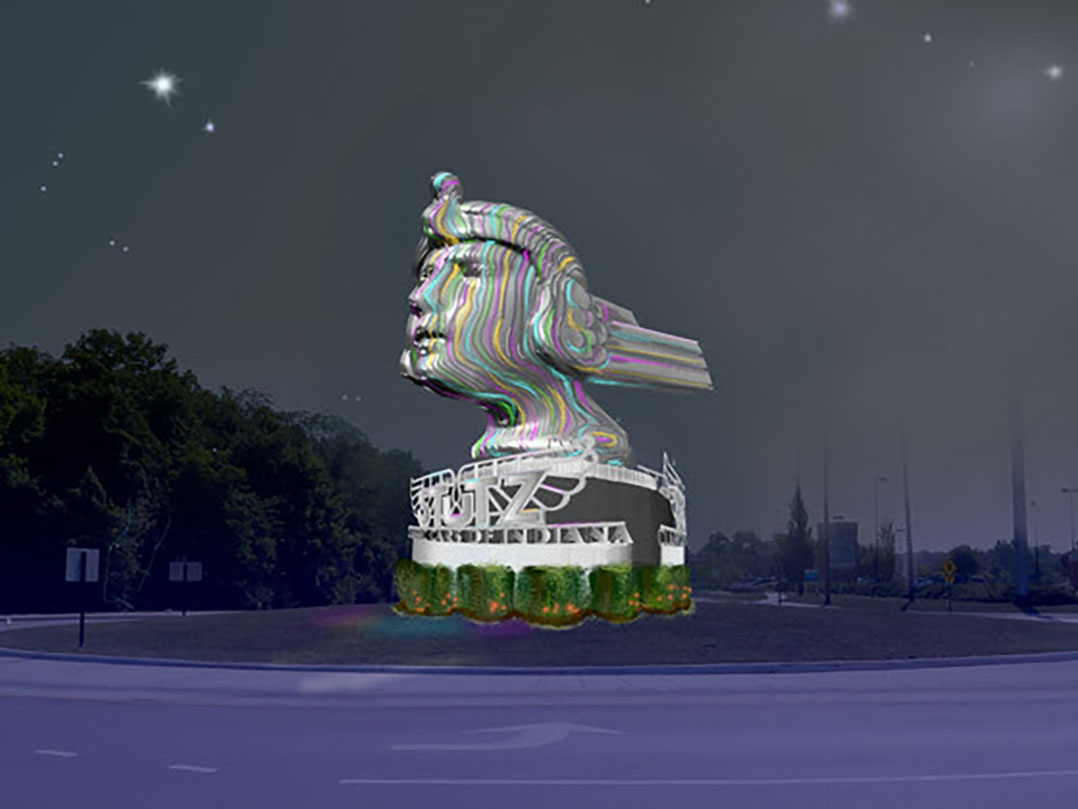 A sculpture inspired by Stutz cars is set for 96th Street and Gray Road. (Image courtesy of the City of Carmel)

The sculpture at 96th Street and Gray Road is inspired by the Stutz “Ra” Art Deco hood ornament, only this one will be 16 feet tall and set on a 5-foot Indiana limestone base. The sculpture will be built with vertical slices that allow light to flow through and display illumination from within at night.