You are at:Home»Night & Day»Artist Profile»Actor eager to reprise role of salon owner in ‘Shear Madness’ at Beef & Boards

When Daniel Klingler was presented the chance to reprise his role of Tony Whitcomb in “Shear Madness” at Beef & Boards Dinner Theater, he embraced the opportunity.

Klingler appeared in the 2017 show of the “whodunit” play with audience participation to determine the killer in this murder mystery. The play runs from Dec. 28 to Feb. 5, 2022, at the Indianapolis theater.

“‘Shear Madness’ is, by far, the most fun I have had in a production,” Klingler said. “It is non-stop madcap comedy where the audience gets to be involved in interrogating the suspects and ultimately voting on the murderer. Every performance is different from the one before, which, as an actor, keeps you on your toes. I think that’s why all of the original actors returned. We have so much fun, work extremely well together and trust one another. ‘Shear Madness’ is one of the only shows I felt I could perform for a long time without getting bored.” 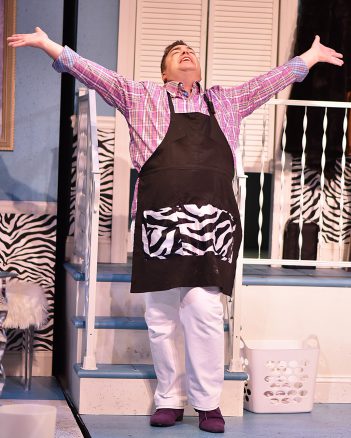 Klingler said he loves the role of Whitcomb, the salon owner.

“Tony has a strong sense of humor, is vivacious and sassy,” Klingler said. “He is one of my most favorite characters to portray. To bring him alive in the roller coaster that is ‘Shear Madness’ is thrilling.”

The setting for the murder mystery is wherever the show is being presented.

“We open the play up to the audience, requiring us to be on our feet at all times,” Klingler said. “Therefore, the nature of the production needs to appear organic and improvisational. I am blessed to be working alongside these dynamic actors. The last time I performed this piece I felt extremely secure because of the level of talent among our cast.”

Following the conclusion of “Shear Madness” in late January 2017, Klingler moved from Indianapolis to New York. He joined the hair/makeup union for TV, film and live entertainment. He worked in the hair and makeup departments for the Broadway shows “Frozen,” “Mean Girls” and “Aladdin.” In addition, he worked with the hair teams for several TV productions, including “The Blacklist,” “The Sinner,” “Pose” and “Elementary.”

“People may be surprised to learn one of my favorite gigs was selling wigs on QVC for HairUWear,” he said. “I loved watching The Home Shopping Channel and QVC when I was little, so you can imagine how ecstatic I was when they asked me to work with them.”

Klingler worked on “Aladdin” on Broadway for three years in the hair/makeup department.

“The cast and crew are some of the nicest people I have worked with in the theater,” he said. “I remember the first time I did the makeup for the Genie. His makeup transformation is about 10 minutes into the show and is a very quick transformation. We could not practice on the actual actor beforehand, so you had to learn in real time. The first time I applied his makeup was surreal. I thought to myself, “I’m applying the makeup on a Broadway star in a hit Broadway show. How did I get here?’

“Suffice it to say, I feel very blessed to have the opportunities I have had.”

Klingler was working on Broadway when the COVID-19 pandemic hit.

“In fact, we were prepping wigs for ‘Aladdin’ when the company manager announced we would need to pack up our things and leave for the unforeseeable future,” he said. “As the pandemic stretched on, I discussed with my husband if we wanted to stay in NYC. It was a difficult choice, but we made the decision to move to Dallas for my husband’s job. Since moving to Texas, I have been working on two TV Series, ‘1883,’ a sequel to ‘Yellowstone,’ for Paramount and (it) stars Faith Hill, Tim McGraw and Sam Elliott, and the series ‘Love and Death,’ starring Elizabeth Olsen, for HBOMax.”

Klingler grew up in Columbus, ind., and graduated from Columbus East High School.

“If anyone has been to Columbus, you will know it is a vibrant arts community,” he said. “I began performing when I was very young and cut my teeth with the Millrace Players Community Theater.”