You are at:Home»Current in Noblesville»Noblesville Community»Etchison to be inducted posthumously into Indiana Basketball Hall of Fame

“Never once did Tony think or talk about awards,” said his wife, Toby Etchison. “While these accolades bring us joy because people remember and honor Tony, he was never after recognition. Tony just loved the game and his team.”

Etchison, who died at age 47 in a 2018 farming accident, was recently named to the Indiana Basketball Hall of Fame. The induction is set for March 23, 2022. 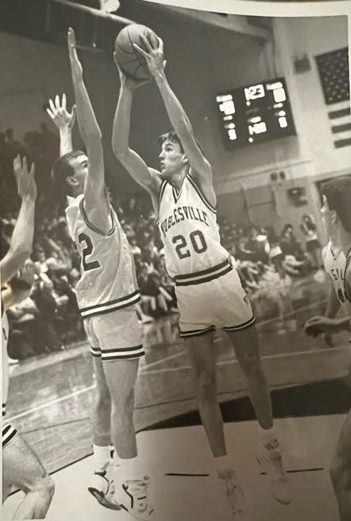 Etchison, a four-year starter at NHS, scored 1,357 career points and led the Millers to sectional titles in 1989, 1990 and 1991. The 1991 NHS graduate averaged 22.8 points, five rebounds and four assists as a senior. He was a two-year starter at Mercer University.

Etchison also is survived by his three sons, J.P., Gus and Tillman.

“The boys and I are extremely honored and humbled by this amazing tribute to Tony,” Toby said. “Of course, it’s bittersweet. As thrilled as we are, we wish he was here to accept it.”

Etichson and his wife were high school sweethearts.

“Tony had so many phenomenal performances. Every time he stepped on the court, you knew something great was going to happen,” Toby said. “The thing that stuck out the most was the friendships and the loyalty he had for his teammates. To this day, those teammates are our dearest friends.”

“They continue to love the game like their father,” Toby said.

“Tony was so extremely proud of all three boys and always encouraged them to pursue their passion and follow their heart,” said Toby, who lives in Arcadia right down the road from the family farm.

Along with work working on the family farm, Etchison had a 22-year career as an agent for Indiana Farm Bureau Insurance.