You are at:Home»Current in Westfield»Westfield Community»Westfield Historical Society honors volunteers 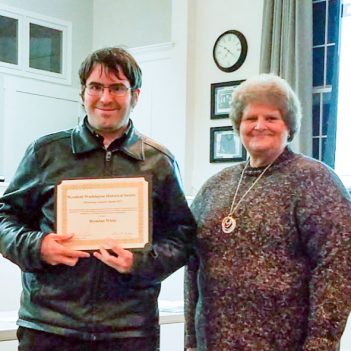 Brendan White is a history buff.

So even though he lives 40 minutes away from Westfield in Greentown, he was named the Westfield Washington Historical Society’s Flickering Lantern Volunteer of the Year.

White said he was surprised by the honor.

“I spend most of my time there accessioning and digitizing photographs and documents, such as old letters written during the 1880s,” he said. “I am thinking about doing other projects for the organization, such as writing a historic walking tour booklet of downtown Westfield.”

“I am volunteering and working part time at these organizations primarily to get work experience,” White said. “I am looking out for a full-time job to utilize my master’s degree in history, which I earned from Ball State University in 2018.”

Peyton said the awards are presented at the year-end meeting.

“They are given to those that have gone above and beyond volunteering and working in the museum,” Peyton said. “Without all of our volunteers, we wouldn’t exist. We have the best volunteers that are passionate about history and preserving artifacts.”

This year, three businesses — Custom Concrete, Shelby Materials and Wilkins Lawn & Landscape — were named the Flickering Lantern Businesses of the Year. It was the first time businesses were honored.

“These businesses volunteered time and resources to put the footers, foundation and concrete flooring in our 1835 Barker log cabin,” Peyton said. “With their help, we are ready for the cabin master to start laying the logs in April.”

Bill Lambdin, a Westfield resident, received the Flickering Lantern Award for Community Volunteer of the Year for a non-member. Lambdin has helped with the Barker cabin.

Peyton and her husband, Jim Peyton, received an appreciation certificate for all their work on the Barker cabin.

“We were shocked the group gave us an award for putting so much time in on the cabin,” said Peyton, who is the first female president of the Westfield Historical Society.

Peyton said the cabin is expected to be completed at the end of October 2022.

Bricks are on sale for the cabin’s walkway. For more, visit wwhs.us.