You are at:Home»Night & Day»Entertainment News»Klush will be a featured performer in Elvis tribute show at Palladium

Shawn Klush admired the singing style of Elvis Presley at an early age.

“Every kid when they are young grabs a broomstick or a bat and stands in front of the mirror,” Klush said. “It’s either to Elvis Presley, Tom Jones or The Beatles and Kiss. I didn’t realize there was a life around that. I love it and I still love it.” 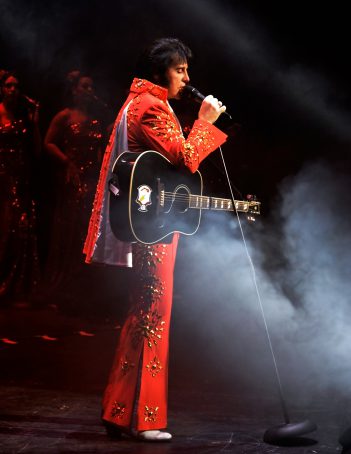 Shawn Klush will perform as Elvis from his Las Vegas days. (Photo courtesy of Shawn Klush)

Klush will be one of featured performers in the “Elvis Tribute: Artist Spectacular” at 7 p.m. Jan. 16 at the Palladium at the Center for the Performing Arts in Carmel. The concert celebrates what would have been Presley’s 86th birthday Jan. 8. Presley died in 1977 at age 42.

“It’s a high-energy show that takes you through Elvis’ life musically,” Klush said. “We go up from Sun Records to ‘Suspicious Minds,’ ‘Burning Love’ and ‘My Way.’ Come out and leave the inhibitions behind.”

Cody Ray Slaughter will perform as Presley in black leather from the 1968 TV comeback special. Ryan Pelton will perform Presley’s songs from the movie years and when he was in the military. A surprise guest will perform songs when Presley first started.

Special guests include the Blackwood Quartet, members of the Gospel Music Hall of Fame. All performers are backed up by The Fabulous Ambassadors and The Nashville Dreams, the female backup singers.

“I’m more prone to the jumpsuit stuff because that’s what I remember as a child,” he said. “The quality of Elvis tones, to this day, it’s fresh.”

Klush’s favorite song is “If I Can Dream,” adding that he doesn’t even sing in this show.

“We usually hit Australia and the U.K. and across the U.S.,” Klush said. “We just got home from the U.K. We did 11 sold-out shows over there. It’s nice to go over there because it’s Beatles land, and to see the uprising of Elvis fans — even The Beatles were Elvis fans — that’s what is cool.”

Klush performed as Presley in “Shake, Rattle and Roll,” on a CBS miniseries and in the HBO series “Vinyl.” He is now doing an FX show, “What We Do in the Shadows,” a mockumentary comedy horror series where he plays Presley as a vampire.

Klush, who lives outside Scranton, Pa., has worked for “Legends in Concert” for Myrtle Beach, S.C., Branson, Mo., Las Vegas and Atlantic City showrooms. He mostly performed in Myrtle Beach.

“When you do the same seven songs for 10 years, you kind of get (to where) when you do your own shows, (it’s) I’m not doing any of those songs,” Kush said of the “Legends in Concerts.”