You are at:Home»Current in Fishers»Fishers Community»Walker bids to retain state senate seat

Indiana State Sen. Kyle Walker, elected through a special Republican caucus in 2020 to replace Jim Merritt, has announced his bid for reelection this fall.

District 31’s boundaries have been redistricted since Walker replaced the retired Merritt on Nov. 17, 2020. The district now encompasses Fishers, Lawrence, Noblesville and Indianapolis. 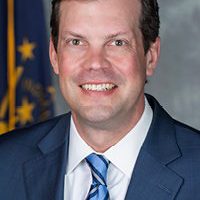 “I’m approaching this in a way of trying to spend as much time as I can with individual voters in the community,” said Walker, a Lawrence resident. “(My campaign) will be heavily grassroots focused. I think it’s important for all of our neighbors inside District 31 to have a voice and know who’s representing them at the Statehouse.”

Walker said he plans to canvas the area door-to-door.

“As the senator, I try to make sure I’m very accessible and folks can access information about the bills I sponsor or author or vote for online,” Walker said.

During his tenure in office, Walker said he is most proud of helping to increase education funding by $1.9 billion.

“What that is going to allow school districts to do is raise average teacher pay, hopefully, to $60,000,” Walker said. “The other thing it did was greatly expand school choice to allow parents’ ability to determine which school is best for their children. I think that’s a very important freedom.”

Walker also co-sponsored a bill that established a guns and intelligence task force, a multi-community program.
“It was piloted by Indianapolis Metropolitan Police Dept. and Fishers Police Dept.,” Walker said. “It is a task force that allows them to share information about crimes committed using a firearm. We know criminals don’t care about city boundaries or county boundaries, and they operate wherever they’d like, so this will allow us to crack down on folks who are the most troublesome.”

Walker also helped secure $1 million of funding for the Internet of Things Lab in Fishers.

“That money will allow them to increase programming across the state, including here in Fishers, and greatly expand those entrepreneurial opportunities.”

If reelected, Walker said he wants to help the state maintain fiscal responsibility. He said that includes maintaining a focus on education spending.

“Currently, (education spending) is half of the budget,” Walker said. “We have committed from our caucus side to maintain half the budget for education funding.”

Walker said he also hopes to continue to assist the community with public safety and economic development, such as encouraging an entrepreneurship environment to allow business owners to Grow and thrive.

Walker said he plans to focus on the same issues, even though the boundaries for District 31 changed.

“The issues I focus on in the current district will be virtually the same issues that I’ll focus on in the new district,” Walker said. “I’m eager to earn the support of the voters for another four years.”