You are at:Home»Current in Fishers»Fishers Community»Group offers gifts, gratitude to Vietnam War vets

“We estimated there are 120,000 Vietnam-era veterans in the state of Indiana,” said Fewell, executive director of Welcome Home Vietnam Veterans, Inc. “We trying to find them and give them the thanks, the long overdue gratitude and appreciation and respect they weren’t shown even being affiliated with that war or when they came home.” 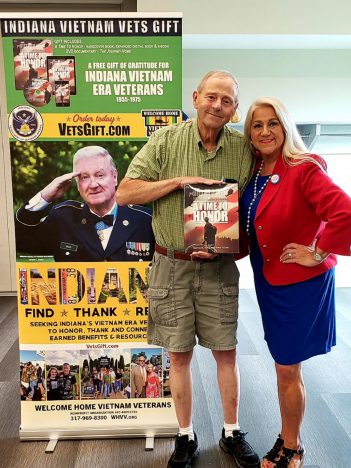 The gift of gratitude is for Indiana Vietnam-era veterans from 1955 to 1975. The gift includes “A Time To Honor,” a hardcover book, with expanded digital book and e-book, and “The Journey Home,” a documentary on DVD. The gift can be ordered on VetsGift.com.

The expanded digital version will include a photo of the veteran receiving the award.

The program started in March 2021. Welcome Home Vietnam Veterans is in the Indiana Dept. of Veterans Affairs, 777 N. Meridian St., Indianapolis. Gifts also can be picked up at that location.

“The benefits have really ramped up,” Fewell said. “It’s almost like an emergency mission. There are now 17 presumptive illnesses that are associated with the Vietnam War. There were four just added, including diabetes. Now more than ever, we just want to find these guys because we also estimated that half of these 120,000 Vietnam veterans have either never applied for benefits, or they followed a claim years ago and it was denied. There (are) a lot of benefits that can be life-changing to these veterans. It’s just a matter of navigating or finding someone to help them through the process.”

Fewell said the government is allowing for more benefits, but a lot of veterans have given up on getting benefits from the government.

“They may be getting health care benefits but there are more benefits available,” she said. “For instance, for disabled veterans, there (are) property tax deductions. There are caregiver benefits that they might be eligible for if they have an interest. There are a lot of things the veterans might not be aware of that have been recently added.”

“Half of that era’s veterans are not getting any benefits,” Fewell said. “These are benefits they’ve earned for their service.”

Fewell said it took many years for the government to recognize the negative effects of the exposure to Agent Orange, an herbicide and defoliant chemical used by the U.S. military in Vietnam, had on U.S. veterans.

Fewell said her group has hand-presented more than 4,200 gifts to the veterans in Indiana. There were 63 events in 2021. Fewell also is a member of the Caroline Scott Harrison Chapter of the Daughters of the American Revolution. Those volunteers help distribute the gifts.