You are at:Home»Current in Westfield»Westfield Community»Hittle remembered for his passion for firefighting

Ron Hittle was passionate about the firefighting profession.

In fact, two of his sons and a grandson followed him into the field. In addition, he served as a guardian for Brian Mayo, who lived with the Hittle family in high school and was like a son to Ron Hittle, works for a fire department in Hardeeville, S.C. Mayo’s son Joe also is a firefighter in another South Carolina department. 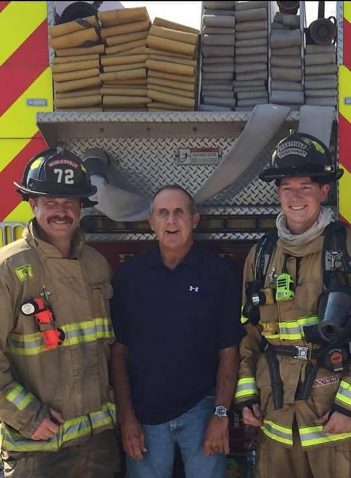 “My father ate up everything about firefighting,” said Josh Hittle, a Cicero resident and firefighter engineer with Noblesville Fire Dept. “He loved it. He lived and breathed it.”

“They tried to put him on the ventilator, and he had a heart attack,” said Josh, adding his mother Nancy also tested positive for COVID-19 at the same time but recovered.

“Every room of my parents’ home, they still have a scanner, Hamilton County-wide,” Josh said. “Every time there is a run goes out, you hear it. He even slept with one in the bedroom. If I went out in the middle of the night, he’d say, ‘I heard you went out last night.’”

“In the early 2000s, he would still show up on scenes and talk to the guys,” Tyler said. “He always wanted to say, ‘Job well done.’ Even the last couple of years, he called after I had a fire and ask who was on this truck or that truck. He’d say, ‘Make sure to tell them they did a really good job.’ He was always wanting to listen to tactics and how people carried themself and performed. It was something he always cared about.”

Tyler said there is a long list of people who became firefighters because of his grandfather.

“He established that passion for firefighting in numerous guys,” Tyler said. “There are guys that worked for him in the landscaping business that then got on at the fire department. There were guys who came to him for advice on interviews.”

Diana Peyton, president of Westfield Washington Historical Society, said the Hittles have always been an important part of the Westfield community.

“Ron grew up in our community and served it well,” Peyton said. “Ron was an honest man that started a very successful business and was always first in line to help anyone in need. We’ve lost a great asset to our community. Always smiling, lighthearted and an all-around nice guy. He will definitely be missed.”