Dominic Cheli spent some quality time in the Indianapolis area last summer as a finalist at the American Pianist Awards.

“I’m looking forward to seeing some old friends and new faces as well at the concert,” Cheli said. “I enjoyed getting to know the community and a lot of supporters of art and music in the area.” 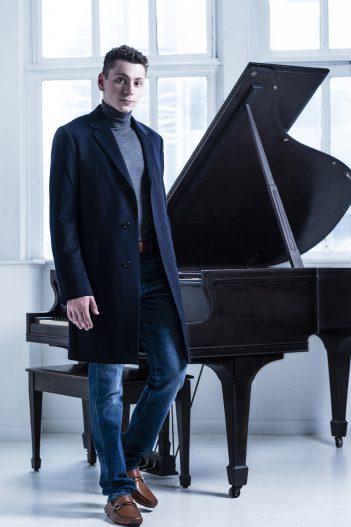 Dominic Cheli was a finalist at the American Pianist Awards in 2021. He will perform at the Palladium. (Photo courtesy of the Center for the Performing Arts)

Cheli and the Balourdet Quartet will perform at 7:30 p.m. Jan. 20 at the Palladium at the Center for the Performing Arts in Carmel.

“We’re looking at influences, particularly Johannes Brahms, not just in his own music which we see the quartet will play, but his influences on many different composers’ art,” Cheli said. “We see it in (composer) Amy Beach’s ‘Piano Quintet,’ which is influenced by Brahms’ own quintet. Beach finds her own voice and unique perspective on music style. The solo pieces I’m playing are just so delightful. Again, they really harken back to Brahms.”

Clara Schumann’s “Romanze in A minor” is a piece dedicated to Brahms.

“It came at a time when she was struggling with her husband Robert (being in an) asylum,” Cheli said. “Francois Couperin’s ‘Le Tic-Toc-Choc’ is a piece Brahms himself would champion. It wasn’t his own music he was interested in but also composers of the past.”

Cheli will open with “Suite for the Left Hand’ by Erwin Schulhoff.

“He’s a composer I’ve been in love with for a number of years,” Cheli said.

Schulhoff’s works were blacklisted by Nazi Germany because of his Jewish descent and his communist sympathies. He was arrested by the Nazis in Czechoslovakia in 1941 before he could leave for the Soviet Union and died of tuberculosis in a prison in Wurzburg, Germany.

“His music was forgotten for many years until it was recovered by the Recovered Voices Initiative, based in Los Angles, which I’m a part of. This particular piece is influenced by Brahms.”

Cheli and Balourdet Quartet member Russell Houston were classmates for two years at Colburn School in Los Angeles. They played in a trio at Colburn for a school credit.

“I met the other members at the Aspen (Colo.) Music Festival,” Cheli said. “They are lovely people, and making music together is going to be a joy.”

Cheli is performing a solo set followed by the quartet.

“The second half of the program is all five of us,” Cheli said.

Houston plays the cello. The other members of the Balourdet Quartet are Angela Bae, Justin DeFilippis and Benjamin Zannoni.

Bae and DeFilippis play the violin and Zannoni plays the viola. They are in residency at the New England Conservatory’s Professional String Quartet Program in Boston. The quartet received the Grand Prize at the 2021 Concert Artists Guild Victor Elmaleh Competition.

“The program is designed for coaching for us, and we also get some concerts and a recital in the Jordan Hall every year,” Houston said.